Cool Wallets mean different things to different people, naturally, but if it means carrying around mostly cards at the expense of paper bills, then narrowing your search to the Best Wallet for Apple Card should prove beneficial. And to that end, you’ll definitely want to consider the Cyanb Front Pocket Wallet since it is one of the Best Cool Wallets around. 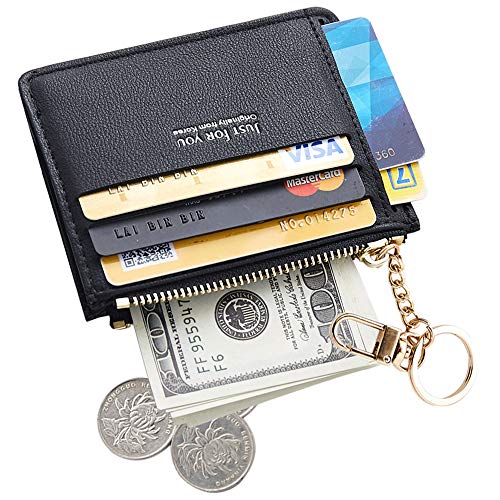 The Cyanb Front Pocket Wallet sacrifices some card slots for the ability to carry cash, putting it in direct competition not only with its competitors but the design philosophy of card cases as a whole. Whether this is good or bad, we’ll leave it up to you to decide.

The Cyanb Slim Leather Card Case Holder sports a healthy amount of color variety on par with the Boshiho Leather Credit Card Holder. You shouldn’t have any problems with finding a color you like. The gold keychain is a nice touch and adds both an air of elegance and an air of playfulness to the wallet’s design.

The wallet is constructed from high-quality PU Leather, which makes it durable and vegan-friendly. Further, PU Leather doesn’t absorb water, making the wallet easier to clean. It’s incredibly lightweight and weighs only an ounce and a half, even lighter than the Karlling Organizer Wallet.

One missing element from the Cyanb Front Pocket Wallet is RFID-Blocking Technology. It’s not a mainstream technology yet, but I think it will become one very soon. And why wouldn’t it? It stops potential thieves from stealing your personal information while from your pocket or purse. If you’re looking for something with a removable ID window, consider the Levi’s Men’s Trifold Wallet.

The Cyanb Front Pocket Wallet, unlike most other wallets in its class, can actually hold a few bills in the little zipper pocket at the front of the wallet. It’ll be much less than classic wallets, but enough to carry you through the day. In terms of cards, the wallet holds about 10 cards. Much less than others, but still not a bad amount.

One of the best things about the Cyanb Front Pocket Wallet is how affordable it is. At $9.00, you can grab one just as something to carry around with you on your everyday travels. Customer reviews are positive too, scoring a respectable 4.5/5 stars on Amazon based on a plentiful 2,503 reviews.