Place the Bryker Hyde Wallet among other Cool Wallets, and it would fit right in. It doesn’t sacrifice performance either, considering it can also shoulder the Best RFID Wallet for its title, thanks to its solid RFID blocking performance. With two ID windows to use, it’s also great for people who carry their license and a work ID. 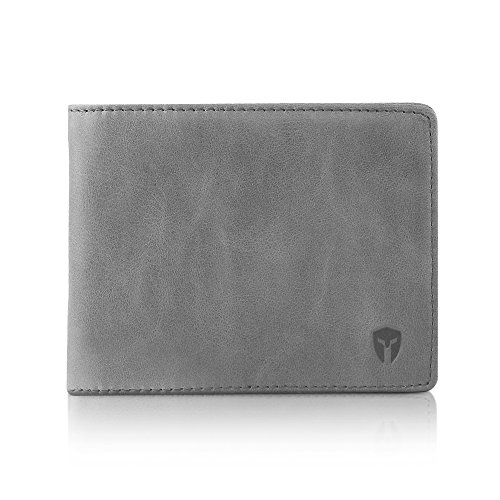 The Bryker Hyde Wallet hits all the right marks, across the entire board: a generous number of card slots to utilize, great craftsmanship, and two separate ID windows that can be quickly shown at a moment’s notice.

The Bryker Hyde Wallet might just be the snazziest looking leather wallet for its price. Its distressed leather looks fantastic; the embroidering around the edges and interior is particularly good. If we could change anything, it would be the option for more colorful finishes aside from the dark tones available.

And yes, it’s also durable! It was constructed from full grain leather for superior quality. The stitching wasn’t used solely for looks either. It’s actually high strength stitching, which keeps the wallet from falling apart so quickly, a weakness some good looking leather wallets suffer from. If there’s any wallet tougher than that, it’s the Flipside Wallet.

The Bryker Hyde Wallet isn’t a simple money clip, but a fully functioning wallet. In fact, it offers a generous number of card slots, 10 in total. And that doesn’t even include the 2 ID windows added for quickly accessing. With all those cards, RFID blocking is a must, and it doesn’t disappoint either. It blocks frequencies of 125KHz, 10MHz to 3000 MHz, including 13.56 MHz. For comparison, the Travelambo Wallet only blocks 13.56 MHz.

While not specifically a minimalist wallet, the Bryker Hyde Wallet does make good use of its space, despite handling 10 cards, 2 IDs, and money. It measures H 3.5″ x W 4.5″ x 1.25” in size, which is relatively small, but get careless with what you carry and it will get uncomfortable in your pocket.

The Bryker Hyde Wallet doesn’t make the same mistake similar wallets tend to make: asking too much. Wallets of this caliber are often priced $50, even $70; but the Bryker Hyde Leather Wallet only asks for $40. Considering its overall performance and presentation, it’s definitely a good price. While the Tommy Hilfiger Wallet is half the price, the Bryker Hyde Wallet’s aesthetic is presented better.

The simple fact that the Bryker Hyde Wallet’s weaknesses are easily ignored should give you an idea of how well it can satisfy your needs and wants. What’s left on the table is a highly functioning wallet, capable of carrying 10 cards, two IDs, and money. But it’s also incredibly stylish, and the leather was utilized expertly.