The first thing you’ll notice about the Nebula Capsule is its form factor. This portable projector also doubles up as a Bluetooth speaker, which is a combination that’s not easy to find. The Anker Nebula Capsule runs Android as its Operating System, which is not too bad considering that most of us would easily figure out how to work it. The pico projector also packs a battery life of up to 3 hours, and has an included remote that you probably won’t find yourself using a lot. If you’d like to compare it with another high-quality projector, take a look at our review of  Leica’s first DLP projector, the Pradovit D-1200, which launches at Photokina too. Either way, we still think it deserves a spot on your list of the best projector. Here’s why: 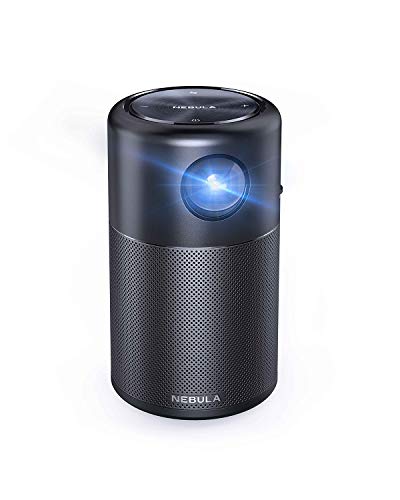 The Nebula Capsule is the best portable alternative for anyone who doesn’t want to move around with a big clunky projector. The soda-can-sized projector features a 5,200mAh battery that powers it for up to 3 hours and built-in JBL speakers for good audio quality. This is a great on-the-go projector or outdoor projector, but take a look at the BenQ W1500 digital projector or the TOPVISION projector for your home.

This mini projector packs a top brightness of about 100 ANSI lumens (500 lumens), which really isn’t as bright as your normal black box – cue the Optoma HD29 Darbee. Despite that, picture quality on the Anker Nebula is still respectable, though a standard resolution of 854 x 480 pixels might make you think of it more as your backup in case the main projector fails. Its operating system also looks quite similar to that of Android TV, but you’ll only get to use that actual OS if you decide to upgrade to the Nebula Capsule II. This projector also lets you listen to music through its speaker mode. It doesn’t get that loud, but still manages up to 30 hours of playback – nothing to scoff at. Shopping for a portable 4K home theater projector? Read the Acer VL7860 projector review.

The size and design of the Nebula Capsule will probably be one of the main reasons you decide to buy it. It doesn’t look as good as the BenQ TK800 or the PIQO 1080p smart mini projector, but its cylindrical shape looks fun, and you get to choose between having it in black or red. On its top you’ll see all the controls you’ll need to operate it. These are the power buttons, volume controls, and a switch button that lets you alternate between projector mode and Bluetooth speaker mode. The projector also comes with an included remote, which makes navigation more convenient when you want to control the projector right from your seat. Its inputs are just the necessary micro-USB port (for charging or a storage device) and a HDMI port. Looking for a projector that can fit right into your pocket? Click the Anker nebula capsule II review.

The Anker Nebula’s support for Android, unfortunately, doesn’t grant it access to the Google Play Store. This means streaming from Netflix and Amazon might be a bit difficult at first, but not if you run Aptoide TV. It’ll grant access to most of the apps that you’d like to use, while still omitting a bunch of others. If not getting apps from Google Play is an absolute dealbreaker for you, another alternative might be downloading the APK of your favorite apps, and then installing them through the file manager. It might sound cumbersome at first, but if you’re determined to get your share of apps on the Play Store to run on the Capsule, then there’s no other choice. Once you get things set up, its IR remote control should allow you to navigate effectively, just like that of the Optoma HD 143X or the EZCast Beam J2 mini projector.

The Anker Nebula Capsule is a great buy for someone who wants a camping projector, or a temporary alternative in case the main projector happens to fail. It can work well as long as it’s in a place with minimum ambient light. Using apps from any app store can be hard especially if you’re not enough of a nerd to figure it out, but the Capsule II tends to solve this problem thanks to its support of Android TV and Google Assistant.

How to Hide the Cables for a Ceiling Projector