What could possibly be the best laptop for students and the best laptop for its performance, the Acer Swift 3 SF314 is a laptop that’s as powerful as it is expensive. It also has an IPS panel to provide stunning visuals and colors from the smoothly processed graphics, and a powerful 8 core processor. 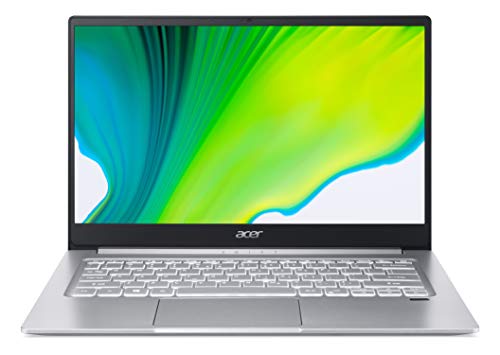 The Acer Swift 3 SF314 has an 8 core processor to create speed, a solid state drive for faster file transfers and less power consumption, and a fingerprint scanner for optional, but high quality security. It also has a metal chassis for a tougher exterior, and ports for compatibility for a wide range of devices despite its slim frame.

The Acer Swift has an AMD Ryzen processor, which is powerful enough to surpass the 8th gen Intel core i5 due to the Ryzen having 8 cores instead of 4 cores. The Acer Swift also has a full HD screen with 8 gigabytes of RAM to not only provide fast performance, but also great graphics processing. To take things a step further, it has a solid state drive to lessen power consumption and faster file transfer speed.

This laptop has a battery life of 11.5 hours, which is slightly less than the Dell XPS 13 7390, which has a battery life of 12 hours. Since both laptops have solid state drives instead of the traditional hard drive, it’s easier to conserve power. You can help maximize the life of the battery if you turn off the backlit keyboard feature, and by using programs that don’t require too much memory or processing.

This laptop’s assortment of usb c/usb type c, USB 3.2, DisplayPort, HDMI, and USB 2.0 ports. This assortment offers fast file transferring speeds as well as compatibility for both older and newer devices due to the inclusion of the USB 2.0 port, unlike the Dell G5 15 5590, which doesn’t include a USB 2.0 ports, and opts for the newer USB 3.1 ports. However, both laptops still provide gigabit wi fi connection speed, and have versatile connections for devices through their ports.

This laptop is incredibly slim despite the different types of ports that it has, managing to be slimmer than the Dell Latitude 7490. Both laptops have solid state drives instead of traditional drives so that they can at their most slim without sacrificing certain physical features. However, unlike the Dell Latitude 490, the Acer Swift doesn’t have an Ethernet port to partially be responsible for the thicker sizes of other laptops.

While this laptop is expensive, it has plenty of features to offer. It has a long battery life, a keyboard with backlighting for some flare, a fingerprint reader for physical security, and more. However, the solid state drive, IPS screen, and the powerful processor is what mainly contributes to the price.

Customer reviews have been mostly positive, praising the laptop for its performance. One reviewer addressed that while it’s not a gaming laptop, it’s great for artists and photographers for its color quality. Another reviewer praised the laptop’s build quality, since the laptop has a metal chassis.