Easily update your ride with the same wireless calling and streaming music features found in newer cars –even if your vehicle is older and doesn’t have built-in Bluetooth capability. The ZEEPORTE Bluetooth Transmitter Wireless Hands Free is included in the Best Bluetooth FM Transmitter buyer’s guide, and given the award for Best Features. 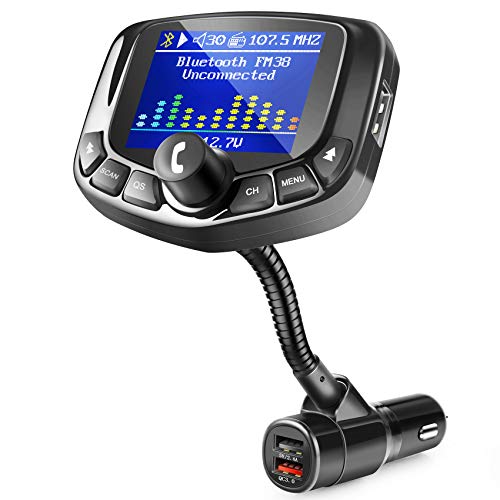 Why We Like It – ZEEPORTE Bluetooth Transmitter Wireless Hands Free

The ZEEPORTE Bluetooth Transmitter Wireless Hands Free delivers as the most feature packed FM transmitter you can buy. A graphical EQ displayed on a large color screen while music is playing looks cool.

The ZEEPORTE Bluetooth Transmitter Wireless Hands Free works great and is packed with features. Plugs into your car’s cigarette lighter for power (that’s what it was originally designed for, but nowadays known as an automotive power socket), pairs to a Bluetooth device, and streams audio output via its FM transmitter to your car stereo on any unused FM frequency (vacant FM frequencies vary by geography). Selecting the best FM frequency to use is super easy on the ZEEPORTE thanks to an auto-scan feature that tells you to which frequency to tune your car radio to hear the ZEEPORTE’s wireless FM output. The ZEEPORTE car kit has a huge color LCD display and control buttons housed on the end of a flexible gooseneck for best positioning. The massive color screen looks pretty cool, although the info displayed doesn’t leverage many colors. While music is playing it does show a colorful moving graphical EQ display –undetermined how accurate it is, but it sure looks slick. The control buttons are also illuminated which makes pressing the correct button easier when driving at night. There are 5 EQ settings for different kinds of music, i.e., rock, jazz, etc., –the ‘Normal’ setting meaning no EQ from the ZEEPORTE so you contour the sound entirely from the car radio. Sound quality of the ZEEPORTE is very good, but remember it all depends on the quality of your car’s stereo –although EQ on the ZEEPORTE may improve your radio’s sound somewhat, it can’t make a crappy stereo sound awesome. There are 3 USB ports so you can charge every device you can carry, or charge two devices while at the same time play music files from a USB thumb drive. One of the ports is a QC (Quick Charge) USB charger. You can also play audio files stored on a TF card, and there’s a 3.5mm aux-in jack to connect devices without using Bluetooth. A built-in microphone with noise suppression enables clear hands free calling. Incoming calls pause music play, display the incoming caller ID on the screen, and voice announce the incoming number over the car speakers.

The design of the ZEEPORTE Bluetooth Transmitter Wireless Hands Free is fairly typical for FM transmitters. The 1.8” LCD is a bit larger than other Bluetooth FM transmitters like the Nulaxy Wireless Bluetooth Transmitter, and it having a 7 color TFT display is a distinguishing feature. Unfortunately the software in the ZEEPORTE just doesn’t do enough with the color display capability. Similar to other FM transmitter designs the ZEEPORTE headpiece with the LCD screen and controls is on the end of a flexible gooseneck allowing all manner of different positioning to see the display. Should work fine for the power port location in most cars, but the ZEEPORTE is not a compact like the VicTsing Bluetooth Transmitter. Auto-scan and QS are also distinguishing features that make finding the best sounding FM frequency pretty easy (if you still get confused there are plenty of helpful videos on YouTube). In addition to 3 USB ports being a differentiator, having one be a QC (Quick Charge) USB port is over the top. QC is a Qualcomm protocol (ZEEPORTE supports the latest QC 3.0) allowing some devices (not all –check to make sure your device is compatible) to fully charge much more quickly. The built-in microphone uses CVC (Clear Voice Capture) technology for noise suppression (probably just CVC’s passive ambient noise cancellation), however how much it helps is somewhat subjective depending on how loud it is inside your car when you’re driving.

The ZEEPORTE Bluetooth Transmitter Wireless Hands Free is feature rich for sure, and for about $20 bucks US you can’t ask for more (precisely why the ZEEPORTE won the Best Features award in the buyer’s guide). It is a bit larger than other designs and coupled with the color display it tends to dominate a car’s dashboard. If you’re looking for something with a more discreet form factor then check out the pint sized IMDEN Bluetooth FM Transmitter.