If you’re looking for the best toys games to set out for a kid’s party, one that encourages creativity and cooperation—you should take a look at the Wonder Forge Disney Princess Enchanted Cupcake Party Game. With dozens of cupcakes available, kids can mix and match to create strange combinations or work together to create cupcakes from recipes. 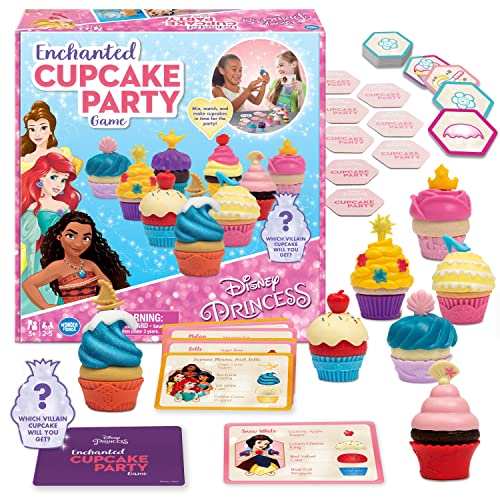 Have your kids stretch out their imagination with the Wonder Forge Disney Princess Enchanted Cupcake Party Game, which uses cupcake pieces that can create interesting combinations.

The goal of the Wonder Forge Disney Princess Enchanted Cupcake Party Game is simple enough: join together various pieces to create colorful enchanted cupcakes, based on Disney princesses. Your kids can follow a recipe or use their imagination. There’s also a level of challenge with the use of a sand timer, if kids feel like they’re up for some competition.

While it helped immensely in getting kids to cooperate, without a party to follow along, it’s a relatively average toy when one plays alone. A single child would have more fun with a LeapFrog RockIt Twist Handheld Learning Toys Games System.

The greatest appeal this toy has is everyone’s favorite Disney princesses. The cupcake parts themselves are appealing enough, making use of very bright colors. With the number of cupcakes included, you can create crazy looking cupcakes. Who needs recipe cards? Since every piece is interchangeable, creativity can run wild for a while.

Speaking of recipe cards, they’re very easy to follow. Each card comes with two recipes: one is based on a single Disney princess, while the other is a mix of several.

The value behind the Wonder Forge Disney Princess Enchanted Cupcake Party Game is, admittedly, very niche. For a party, this can provide a fun distraction for a bit. What it does do well enough is provide an environment for children to cooperate, thanks to the recipe cards. But with so many cupcakes to worry about, you’re bound to lose pieces. Thankfully, customer service is kind enough to replace any missing pieces.

We found there’s more value in the ThinkFun Laser Maze Toys Games. It strengthens the brain, won an award from Good Housekeeping, and can even be fun for adults. It’s perfect for family game night and parties. Couple that with an outdoor activity, such as the Elite Outdoor Toys Games For Kids, and you’ve covered all your bases.

The Wonder Forge Disney Princess Enchanted Cupcake Party Game can be a fun addition to a birthday party, but we wouldn’t recommend it as the main attraction. With that said, it does a better job at creating an opportunity for kids to work together through recipe cards. And since the pieces are interchangeable, kids can toss the cards and get creative.