If you’re looking to expand the WiFi range in a commercial place, you have to look for the Best Router with the Best WiFi range. Mesh routers can help you in that regard. And the Netgear Orbi WiFi 6 mesh system is an excellent one to go for. It should be pretty much around the top of your list, in case you’re looking for the Best Small Business Router. 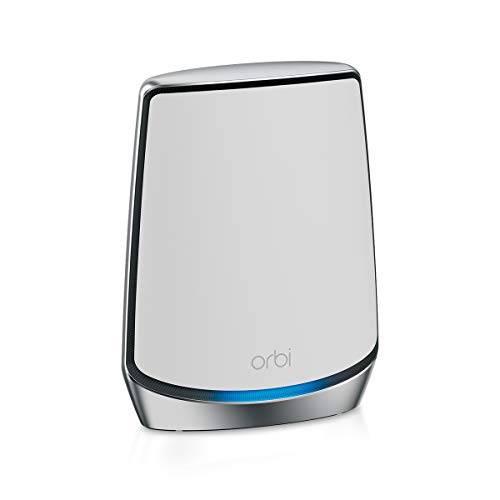 If you’re looking to future-proof your house with an internet connection everywhere through WiFi 6, the Netgear Orbi WiFi 6 mesh system is a fantastic option. Not only does it connect easily to the main Orbi router (it has to be Wi-Fi 6 compatible), but it also provides up to gigabit internet throughout your house.

Even the cheaper options from the Orbi lineup (e.g., Netgear Orbi Pro AC3000, AX4200 WiFi Mesh System, etc.) perform extremely well. So this one is bound to perform even better. This new Orbi model supports data transfer speeds of up to 6 Gbps (not internet speeds), which is fantastic for multiple smart home devices.

This one satellite unit can extend the range of your WiFi mesh system RBK852 by up to 2500 sq ft. That is extremely impressive and very much comparable to the costlier Netgear Nighthawk X10 AD7200 dual band MU MIMO router.

This Orbi Router satellite unit comes with much better build quality compared to something like the Asus BRT-AC828. And the tri band mesh aspect of it results in much better WiFi performance compared to dual band models when many smart devices are connected simultaneously. You may also be interested in our Asus AC5300 review.

The Orbi app available for mobile devices is pretty easy to use. You can use that to manage the connected smart devices or even the satellite units themselves. You can even test & monitor your internet connection using this mobile app.

The value aspect is where this Orbi satellite unit stumbles a bit. Don’t get us wrong; it performs exceptionally well. But 480 bucks for a single Orbi satellite model really is just a bit too much to ask. We understand that WiFI 6 is a relatively new technology, and you have to pay the premium in the beginning. But still, it’s just a tad bit overpriced.

If you like to stay on the cutting edge of technology, and money isn’t a problem, the Netgear Orbi WiFi 6 mesh system would be fantastic for a big household.