Known rather well for its rustic aesthetic, Marshall is an audio manufacturer that prefers to have its customers reminisce about what speakers used to look like back in the day. Despite the dated design, most of their portable speakers still bear today’s advanced technologies, making them capable of offering anything that a modern-looking piece of audio equipment can. The Marshall Stockwell II, for example, looks quite exquisite, and comes with a 20-hour battery life that’ll keep it running for most of the day depending on your usage. The portable Bluetooth speaker also allows you to control your audio’s bass and treble, and is IPX4 water-resistant so you shouldn’t have to worry about some water getting splashed its way. Get to find out more about it through our Marshall Stockwell II review, and see whether it deserves a spot on our list of the best Bluetooth speakers. 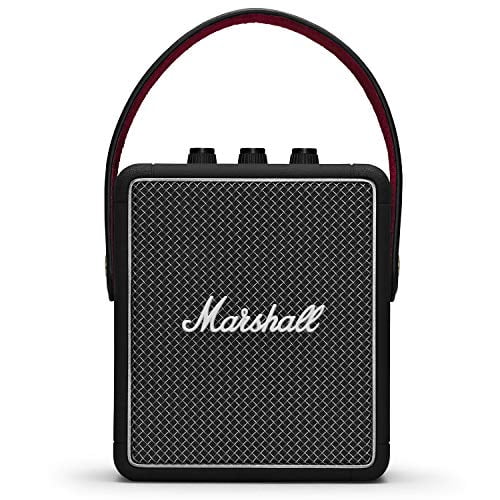 The Marshall Stockwell II speaker is a step ahead of its predecessor as far as sound quality, water resistance, and even design are concerned. It might have missed a few marks with the lack of a speakerphone function, but it does look a lot better than its predecessor, and can charge your mobile devices whenever there’s no power source around. Looking for a similar speaker of almost the same size? Read the Nudeaudio Super M Bluetooth speaker review.

The Marshall Stockwell II portable speaker handles low-bass content very well, and keeps distortion at a minimum when turned up to its highest volume. It produces stereo sound with its dual 5-watt tweeters and a single 10-watt woofer, and has the volume bass and treble knobs on its top instead of buttons you can press. You won’t be able to link it up to other Stockwell II speakers to amplify the sound, but if this is something that you really want to be able to do, then you should consider the JBL Charge 4. Music can be played through Bluetooth or an AUX connection, but the Stockwell II doesn’t have any Wi-Fi support, so you won’t be able to stream any content. One of the best wireless speakers that you can still play music 50 feet away from your smartphone is discussed in the Logitech UE mobile boombox review.

Two features that make the Stockwell II stand out from other Bluetooth speakers are, of course, its form factor, and the leather handle that arcs on top of it. The speaker itself is made out of a hardy silicone shell, unlike the Yamaha PDX 31 portable dock, so it should be able to survive a couple of accidental drops without leaving any mark. Charging is done through the USB-C cable that’s included in the packaging, and in case your phone is low on battery as well, you can plug it into the speaker through the same cord and keep it from shutting down. Just like the OontZ Angle 3 Bluetooth speaker, the Stockwell II also has a battery indicator on its top panel so that you’re always aware of how much longer you’ll be able to listen to your music.

The Marshall Bluetooth speaker projects sound from both its front and back, and like the Kilburn II, it utilizes Blumlein Stereo Sound technology for an immersive listening experience. It’s not the best choice for the kind of speaker that you’d like to use at a party, but if you’re looking for a bedside companion or something to play music whenever you’re in your sitting room, then the Marshall Stockwell II speaker should do you just fine. Unfortunately, this speaker doesn’t come with a speakerphone function, but if this is something you can’t do without, then perhaps the Bose Soundlink Color II Bluetooth speaker may be a worthy alternative.

Compared to the original Marshall Stockwell, there are a couple of things that we wish would’ve been shipped onto the Stockwell II as well, but all in all, the new speaker is a stunning piece of audio equipment, and is much easier to carry around. 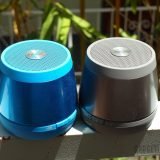 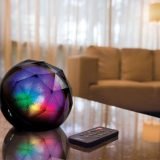 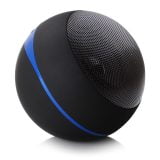 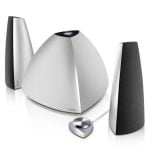 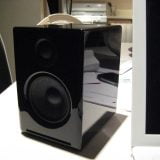 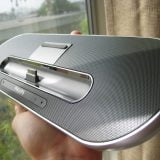