The first soundbar I ever encountered was, wait for it, a speaker that had been jury-rigged to output the sound from a Zenith 19-inch TV. Definitely not the best version of a great wireless home theater system. As you can imagine, the concept of speakers outputting the audio from your TV, be it a television image or a movie, has improved since then — matured even. The advent of the flat panel display being placed on a wall necessitated the audio matching the panel’s unobtrusive appearance. This is why stand-alone speakers, while still a sensible approach for a home theater, are often looked askance at when there’s a wall-mounted flat-panel TV.

So bring in the sound bars instead. At its most basic, you have a set of speakers inside a cabinet that can be directed toward the viewer, unlike the Hitachi HSB32B26 Bluetooth Sound Bar. Of course, that’s like saying the Queen Mary floats on the water the same as a speedboat: improvements in the audio quality, the physical construction, and the technology controlling the audio output have undergone changes and improvements that belie a sound bar’s relatively small size in comparison to stand-alone speakers.

So let’s aim our ears at the Harman Kardon SB 16 2.1-channel active soundbar speaker system. Now your $689 retail buys you more than just the sound bar in what is one honking big box (I’ve seen 32-inch TV boxes that were smaller): a 100-watt subwoofer (also black) comes along for the ride. Where to place the sub is not an issue, since the bass being generated is omnidirectional, but you‘ll most likely want it out of the way in an unobtrusive corner or perhaps behind the couch (Harman suggests moving it away from the wall, so plan on some dust bunnies settling behind it). The SB 16’s powered sub has a 10-inch forward-firing driver (magnetically shielded) and requires an AC socket in order to get its juice, but don’t worry about having to run a wire from it to the soundbar. It’s not a great 12-inch subwoofer, but it gets the job done. Because it’s wireless. Nothing to set up either because it “knows” to connect to the sound bar and does it for you as long as you’re less than 50 feet away and have set the code on the back of the sub and sound bar to the same number (total of 4 to choose from). What you DO have to decide on, however, is the volume to set the sub at, as you would with the LG LAB540W 4.1 Ch 320W SoundPlate. Experimenting while listening to your usual types of audio (be they TV or movies) will help you determine the right amount of sound. Finally, there’s a phase control switch for optimizing the sub’s performance versus the SB 16’s sound bar. Use of the switch keeps both “in phase” with the other so that each’s audio isn’t causing interference patterns with the other. I found, as Harman noted in the instruction manual that I downloaded from their website, that keeping this setting at “O” worked fine. Again, feel free to experiment. 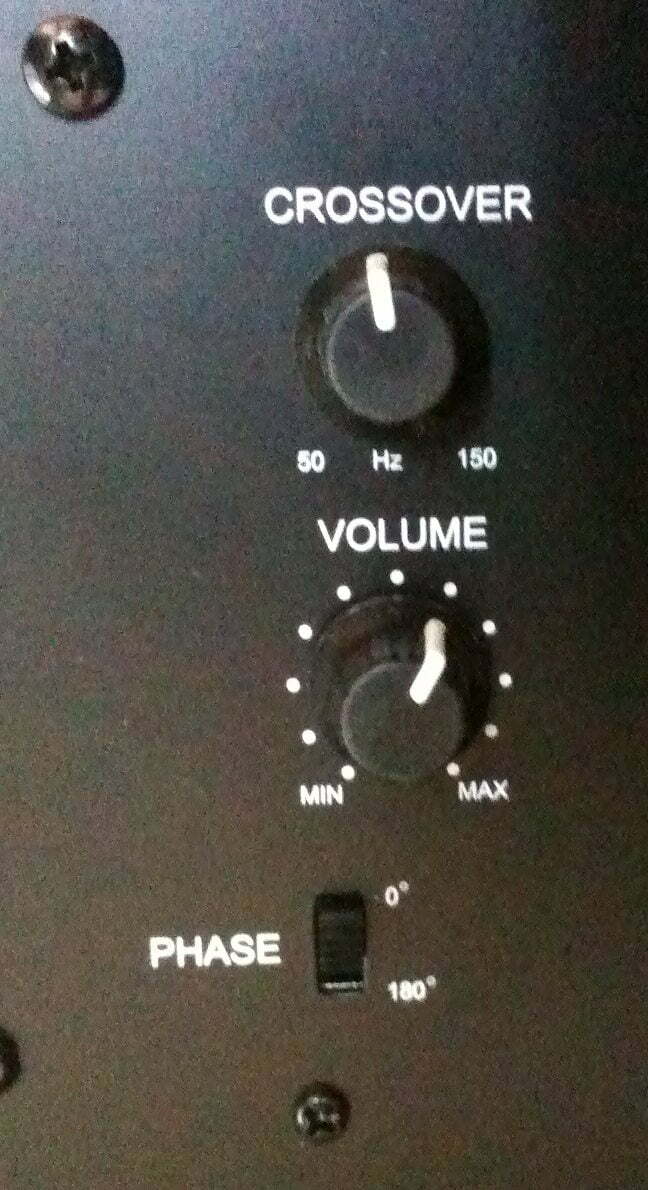 So to test the Harman Kardon SB 16, all I’m doing is placing the sound bar in front of and up against my 60-inch on its TV stand, with the sub in a corner. The rubber feet keep the bar standing still, and I’ve flipped the equalization (EQ) switch on its back to “Table” rather than “Wall” for obvious reasons (mounts come with the package for wall mounting and mate with the sound bar to lock it in position). The 36-inch length fits fairly unobtrusively under almost any flat panel or display.

I’m taking the optical digital audio output from the TV directly into the optical digital audio input on the sound bar and that’s the extent of the cabled setup. No need to use the coaxial input or the analog L/R RCA plugs — although since there’s no “true” surround sound, a simulated surround can be had regardless of the input used. And I’ll just leave the power switch in the “On” position, once I’ve plugged in the power adapter.

Now the insides of the sound bar (magnetically shielded, natch) consists of two-way dual-driven left and right speakers modules, each with its 3-inch midrange driver and a 3/4th-inch dome tweeter, video shielded. Of course, you have to power the amplifier with AC, but for that, you get 50 watts of power (25 x 2) at 8 ohms, with a frequency range of 20Hz – 20kHz. That’s more than dynamic enough to provide for a full range when listening — in fact to be fair, most of us who listened to loud music growing up or have aged can’t hear all the frequencies being offered anyway. Thanks, ravages of time.

There’s no remote to the SB 16 so you have two ways of controlling what the sound bar does: a series of buttons at the top edge of the sound bar handle such things as the power, volume levels, and source selected (should you use more than one of the inputs) and activation of the simulated “surround” that turns off the stereo audio response. Illumination of the aid of the buttons in knowing what you’ve pressed, but most will find, as I did, that it’s easier to just use an existing remote to handle these controls. That’s because the sound bar allows this, obviously, and the setup just requires pressing a series of the buttons on the bar in tandem with the remote being used. It sounds a lot more complicated than it is to do. Just follow the directions in the manual.

As for the sub, once turned on and left alone, the only indication of when it’s receiving an audio signal from the sound bar is when the amber “standby” light on the top turns blue. That — and the rumbling that it’s now making. Both the Harman Kardon SB 16’s sound bar and sub go out of ”standby” once the audio is sensed and for all practical purposes it is instantaneous. Turning on the TV, I lower its volume to 0 since using “Mute” displays a text box constantly. Having set the volumes on both the sound bar and sub, one-click above the middle, I start some serious TV broadcast listening while fiddling with the “Trim” switch. The purpose — to alter the audio response until I’m satisfied with the quality of the dialogue being presented. Like so many audio controls, your personal preferences will dictate which of the three settings will be the “correct” one: I ended up leaving it at “2” except when I really pushed the volume way up during a movie (then “1” worked better).

Switching between TV channels, I hit a few talk shows, some syndicated sitcoms, and a few movies courtesy of HBO. Averaging the results over a few days, I can confidently say that the audio, in general, is obviously superior to the teeny TV’s internal speakers, especially when it comes to dialogue which is crisp and clear.

To try out the Harman Kardon SB 16’s “virtual 3D” surround mode, I use the remote that I paired with it earlier and run DVD movies through the sound bar while switching the mode on and off irregularly. I found the mode to be generally effective at simulating a surround effect — especially at very loud levels, although this caused the dialogue to be a bit ragged in my estimation. I can say that using it can be effective in most cases — but I wouldn’t just leave it on no matter what is playing. Some consideration as to when it will be used should be part of the listening process.

Bottom line: The sound bar is svelte and lightweight enough to sit easily on a table or mount to a wall (8 lbs.) — the same can’t be said for the subwoofer which has 34 lbs. working, so be careful you don’t drop it on your feet while moving it about during the initial setup. The real issue — that of the audio response — is spot on for watching television and movies in a bedroom, because you can get a quality response that obviates the ho-hum coming from 95%+ of TVs with more than enough volume without hitting distortion. Although the price may be a bit off-putting to some, taking into account that besides a quality Harman Kardon “build” in the sound bar, there’s an included wireless subwoofer that is both convenient to use as well as a powerful addition to the audio experience. All ready to go in a single package that is the SB 16.