You will find yourself deciding between a fixed screen vs a pull-down for a projector at some point in your purchasing process. Both types of screens have advantages like a wide viewing angle, and your options will likely rely on the best projectors and their uses. Although, repair on a projector screen may be more expensive in some cases. However. as the name implies, a fixed-frame screen allows the user to project movies and TV shows on an ever-present screen. On the other hand, a retractable screen can be pulled down to open, making it one that can be stowed when not in use. You should also consider whether you want to use a wireless projector vs. a wired projector.

Consumers with home theater rooms typically prefer fixed frame screens because the room will only be used for viewing content, including your favorite movies and TV shows. This type of frame offers a large size for home theater enthusiasts and high-end professional viewing in low ambient light rooms. Meanwhile, a manual pull-down screen or electric screen is ideal for conference rooms and rooms that serve multiple purposes. Manual screens are used more in an entry-level spaces, while a motorized screen remains more expensive and essential for offices and schools alike. You may also want to consider your desired projector’s native resolution vs. supported resolution.

Fixed frame screens are easier to use and avoid the chance of the screen getting stuck halfway open.

Weight of Retractable and Fixed Screens

One of the primary advantages of a fixed projection screen relates to the weight. A manual or electric screen typically weighs more than its fixed counterparts. This weight difference stems from the additional components required to house the screen when it is compact. Additionally, electronic retractable screens need a motor and additional mechanisms to safely lower or raise the projection screen surface. With a fixed frame screen, you need only the screen material and other components, and the screen can be hung on most walls, including a wall with a cutout for the great quiet projector if you want rear projection as one of your screen innovations.

Ease of Use for Projection Screens

When it comes to projector screens and the projectors themselves, you should easily use the device how and when you want. However, some screens require more effort than others. In general, fixed frame screens offer the highest ease of use since they do not have to be pulled down or retracted. Instead, they hang on the wall, available whenever you want to use them. On the other hand, portable projector screens require more effort for each use, even if the screen is a motorized or electric projector screen. You may also need to reduce ambient light in multi-purpose locations.

The biggest detractor from using a retractable screen appears when the screen gets stuck halfway open. If you are trying to watch content, you will have to figure out how to open the product the rest of the way, and you may have to decide how to close it completely if you struggle when it’s closing. Even motorized screens face these problems sometimes, and it can take a while to figure out how to fix the issue. To optimize your presentation time, you may want to pull the screen down ahead of time.

Fixed screens offer a lower-cost option for home theater users. But, weigh your options regarding a rear projector screen vs a front one before you buy. Similar to weight, the affordability comes from the fact that these screens don’t have to retract, ultimately requiring fewer parts. Additionally, an electric screen has to have a power source and mechanisms to close the screen. The addition of these mechanisms and the housing required makes most retractable screens more expensive. However, portable screens and electric screens both allow you to stow them when they are not in use.

Some projection screens are fixed in place, but retractable projectors offer a way to stow the screen in multipurpose rooms.

What are electric projector screens?

Fixed frame screens provide a permanent solution for home theater enthusiasts and businesses alike without the hassle of moving the screen when you aren’t using it.

What are projector screens made of?

Projector screens are typically made of a PVC tension screen material or painted fabric.

STAT: We recommend spending around 15-30 percent of your projector cost on the type of projection screen that would be the most suitable for matching the quality-to-cost ratio with your projector. (source) 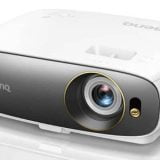 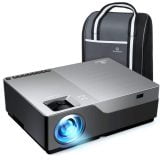 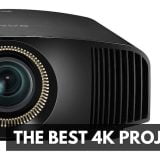 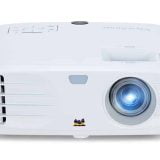 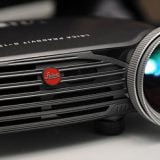