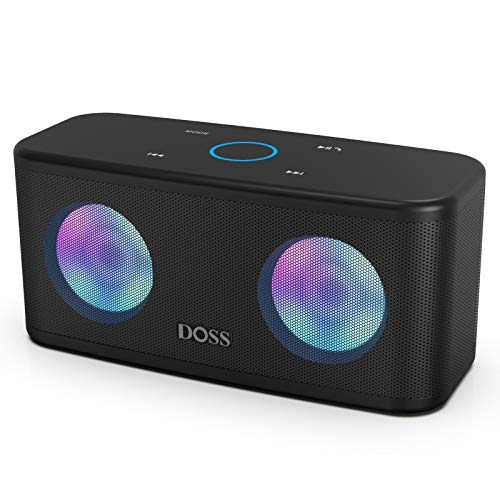 You would think the DOSS Soundbox produced only average sound quality based on its budget-like price. You would be wrong. Not only does it have fantastic sound quality, it also has 360-degree sound. When you think about it, it’s strange how many Bluetooth speakers don’t have this nice little feature. You only really see it in obscenely expensive ones. Kudos to DOSS for producing one that isn’t. If you want to compare this with another wireless speaker option, you should read our review of how Harmon Kardon updates SoundStick speakers with wireless everything.

The Doss Soundbox Touch Bluetooth speaker has an overall battery life of about 12 hours. You can get 20 hours with other speakers like you’ll find in our JBL Charge 3 or the one in the Dbest duo Bluetooth rechargeable mini speaker set review. But on the higher side, the JBL Charge 4 Bluetooth portable speaker has a full-day, 24-hour battery life. The sound quality on the DOSS Soundbox is better than expected. The stereo sound can be played through the 12W high-performance drivers which feature enhanced bass and less than 1% harmonic distortion. The sound is also broadcast over 360 degrees, meaning you will get to experience great sound performance no matter which way you or the portable wireless speaker is facing.

The feature that stands out above the rest is the touch controls located at the top of the device. It’s easy to switch between the three main options to play music: Bluetooth, MicroSD (for when you want to play music via a MicroSD card), and Aux-In, and the touch control is fast and responsive. The same can be said of the portable speaker described in the Doss wireless Bluetooth portable speaker review. Overall, the build quality of the DOSS Soundbox is excellent and there aren’t any rattling or loose components in the unit. The micro USB charging is also a nice touch. Just make sure you don’t put it anywhere near water because it isn’t rated for water resistance. Similar to the iMainGo X, which isn’t waterproof either. The Oontz Angle 3 is one of the Bluetooth speakers to have a high, IPX5, water-resistant rating if you absolutely need it.

Don’t be fooled, just because a Bluetooth speaker isn’t breaking the bank doesn’t mean it doesn’t produce good sound quality. For its price, which is a measly $40.00, the DOSS Soundbox touch portable speaker produces good sound. The slightly more expensive Bose SoundLink Color II Bluetooth speaker also has impressive sound quality if you want to go with a more established brand. The DOSS Soundbox also comes in a variety of colors like navy blue, pink, tiffany blue, and white. You also get an extra micro USB cable, if you don’t have one already, because the DOSS Soundbox employs USB charging.

The DOSS Soundbox is an excellent portable speaker for those who are looking for great sound, but don’t want to break the bank. Its battery life is only average, sure, but how often do you listen to music for 24 hours straight? Bottom line, go with the DOSS Soundbox if you want to experience the full effect $40.00 has to offer.