Founded in 1977, ADT Tools is a private equipment manufacturing company that is well known for its reliability and remarkable build quality. The 7385 hydraulic bottle jack is one of their popular releases, and it has proven to be a life saver for any motorist that would never want to be caught flat footed whenever they need to change a tyre. As you can probably figure out from the title, this bottle jack has a weight capacity of about 12 tons, making it great for truck owners and van drivers to have stored at the back in case of anything. Make sure you get to the end of this review to figure out if it could be the best bottle jack for you. 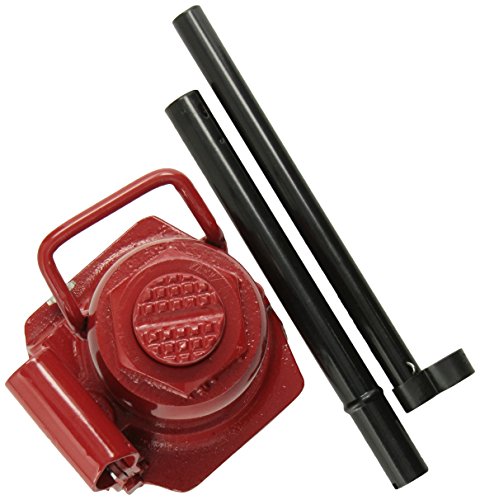 Most car users prefer to be safe whenever they’re on the road in case anything unexpected happens, and one of the many precautions that they take is having a reliable bottle jack on hand. The ATD 7385 is a lifesaver that many cannot afford not to have inside their car, and its short size gives it a huge advantage over other jacks since it’s able to be fitted both vertically and horizontally.

The ATD Tools 7385 hydraulic bottle jack has a decent lift range of about 4 inches, with its maximum height being only slightly over 10 inches. It’s 12 ton capacity easily has us placing it under the heavy duty category, and even with an operating force of about 117 pounds, pumping this bottle jack is not a very strenuous task. The jack also accommodates heat treated extension screws, and unlike the Alltrade 640912 Black All Bottle jack, it’s a lot more easier to move around with.

Designed in such a way that the hydraulic pump is to the left of the cylinder, the ATD 7385 hydraulic jack is somewhat easier to pump, and when you’re using it for anything else other than your vehicle, it’s a lot easier to fit into tight spots. The bottle jack can be described as short and stubby, as it measures 10.1 x 5.9 x 5.6 inches, and is one of the shortest yet most capable jacks you’ll find in the market. It also comes with a carry handle to move it around easily, and with a weight of slightly over 6 pounds, it’s only slightly heavier than the Torin Hydraulic Bottle Jack Capacity.

By any standard, the 7385 is a short hydraulic bottle jack, which makes it suitable for use with vehicles that have a low profile. It’s small size is also a huge advantage since it allows for use in a horizontal position, which is not like many other bottle jacks in the same category. For those that are curious, the ATD 7385 meets the ASME/ANSI & PALD safety standards of use just like the Pro Lift B 004D Grey Hydraulic Bottle jack does, so you have nothing to worry about in that aspect.

The ATD 7385 is a great option to go for especially if you would prefer to have a jack that doesn’t take up too much storage space at the back of your car, but still has enough power to do what you’d want it to. Head over to Amazon to see what first time users had to say about it, and find out if your expectations are likely to be met.