You may be thinking that you’re done looking for the Best TV Antenna when you finally buy and install it. But if you live in a more rural community, you might want to check out some of the Best TV Antenna Amplifier too. To this extent, you should give the Antronix Four Output Amplifier a look because of its fantastic stability and safety features. 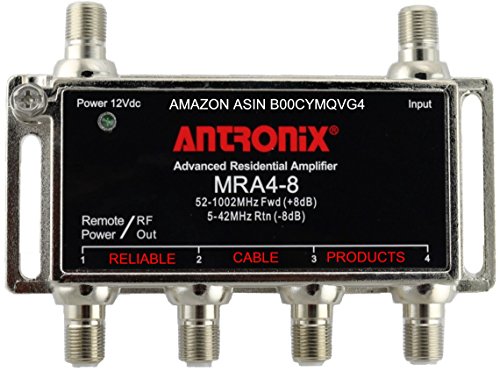 The Antronix Four Output Amplifier is a good starting point for anyone looking to boost their TV signal. It has four outputs so you can install it to four TVs or cable boxes, and as long as you supply your own coaxial cable it should be very easy to install.

The Antronix Four Output Amplifier is a four-port amplifier, This means it can reliably connect to up to four cable boxes or TV’s. And even by allowing it to do so, you’ll still receive a good signal and image stability. There’s no word on if it supports 4K, but you should at least receive better or at-par HDTV signals. Consider the DrillTop TV Antenna Amplifier if you want something for 4K.

The hardest part of the install is that the Antronix doesn’t come with a coaxial cable. But this is pretty standard for most amplifiers, so we’re not going to hold too much against it. Other than that, and like the Reliable Cable Product TV Digital Signal Amplifier, the Antronix is another easy-to-install TV amplifier that shouldn’t take too much set-up time out of your day.

The Antronix is built quite strong. It’s made from aluminum to reduce potential corrosion and a 6000-volt protection against surge and also protection against short circuits. These features operate on all four ports and the short-circuit protection will reset itself if it is ever required. Like the Channel Master Ultra Mini 2 TV Antenna Amplifier it’s also very small and is easily kept out of the way.

The biggest issue facing the Antronix TV Antenna is compatibility. It would be a wise decision to check with manufacturers to see if their product is compatible with this one. There are always going to be compatibility issues with TV amplifiers, but there seems to be more with this one. It would be a good use of your time to check because the Antronix is about as stable a receiver as they come. A good way to avoid this issue is buying a TV antenna such as Winegard Omnidirectional TV Antenna that comes with a built in amplifier.

Noise level isn’t really something people consider when it comes to TV amplifiers, but the noise figure on the Antronix is comparatively louder. At 3dB it’s hard to say it’s loud, but it’s about 2dB higher than its competitors. But on the plus side it’s a highly affordable product and has been well-reviewed on Amazon, scoring 4.5/5 stars based on 384 reviews.