Who gets excited about a work light? Sure it’s good to have a light that can move around with you when you’re trying to fix something in a dark corner or do some other kind of DIY stuff around the house, but excited? Not much. But, reading the best tools recommended by Gadget Review can excite you!

What Else Is There?

Me, I used to use an old one from my Grandpa’s tool shed that basically was a metal cage in front of a tungsten bulb that had a hook at the top. You could definitely say that my shed was missing the best torque wrench. Pretty 20th Century for sure, and so the PowerShell came along just in time since my moving back to my place after a fire has meant a lot of reconstruction work to restore it to “my” specifications. I thought I just needed another conventional work light. I. Was. Wrong.

The PowerShell is a small squarish box of hard plastic that looks like it can take a few knocks without blinking — the handle is wide enough to hang on a hook, should one show up. But mostly it will be used, as I found out, by letting it stand on its own. To do that, a front panel is rotated to the back and becomes the kickstand. This clamshell design now uncovers a bank of LED lights — bright ones — that illuminate at the touch of a bottom front mounted switch. Since the whole thing can be angled, the LEDs can be aimed where needed. That’s good, but it gets better. Before, I had to be concerned with the work light taking up the space on the extension cord. Now I don’t, because there’s three grounded AC outlets right there at the front bottom next to the power button. Hugely convenient doesn’t begin to cover it. My Man Cave in progress is clapping its hands.

PowerShell has an 8 foot grounded AC cord and obviously the LEDs are “green” and don’t consume the power tungsten ones would have. Plus they are bright and stay cool to the touch — when working in cramped quarters with a work light the last thing you want is to bang against hot illumination with bare flesh. The black and yellow design is kind of cool too. In fact the whole concept is cool from the get-go. Place the PowerShell right up against the tool box so it’s there next time you get the itch. 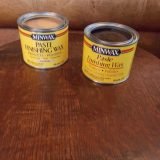 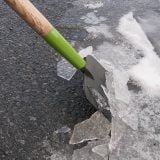 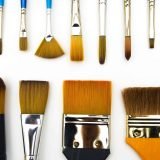 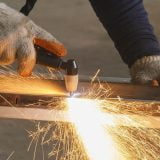 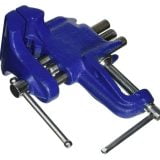 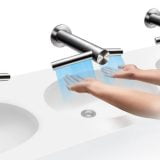