The Battery Optima is an affordable car battery that will give you a faster recharge rate so you can get your car out of the garage and onto the road sooner rather than later. We just wish Optima gave exact times of how long it takes to recharge the battery. Check out our best car battery list for more great options! 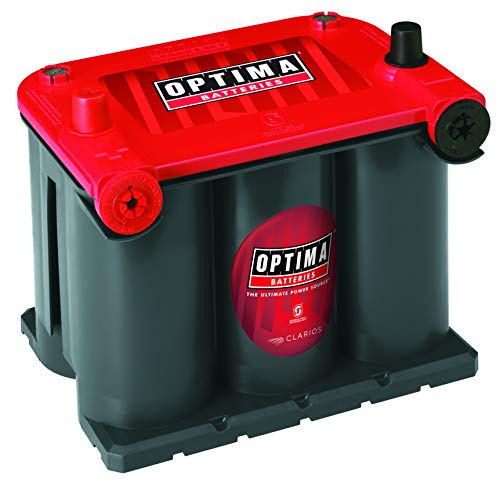 The Optima Batteries RedTop 75/25 features an immense 720 CCA of starting power which is enough to start a car or truck in the middle of winter. It’s maintenance free, so you can just pop it in and go, and has a three year warranty which is more than other car battery companies can say.

The Optima Battery RedTop 75/25 features 720 cold cranking amps which is more than sufficient to get a car or truck started in the middle of winter. You can also check out the Optima Batteries 8020 164 35 Starting for a similar battery with similar high power starting. The RedTop 75/25 also offers faster recharging, though exactly how much faster isn’t specified. The reserve capacity is also generous at 90 minutes. While this may not be the fastest we’ve seen it’s still on the higher-end.

The Optima RedTop Battery is group size 75/25, as you may have already guessed, is maintenance free, and has a longer life thanks to the generous reserve capacity. It’s spill proof design allows you a great amount of mounting flexibility without having to worry about electrolyte leakage. It’s even fifteen times more resistant to a car battery’s worst enemy, vibration. If the roads near your place aren’t paved or just in bad shape, you’ll enjoy this extra durability. The Optima Batteries 8014 045 YellowTop Purpose also contains this extra durability, and can double as a deep cycle battery, if you want to check it out.

The Optima RedTop Starting Battery offers a three warranty with a free replacement battery if something goes wrong. This is longer than most automotive battery companies, but the reviews on the warranty haven’t been the greatest. The battery retails for $200.00 on Amazon which, believe it or not, is on the lower end of the spectrum and qualifies for free shipping. But if you’re looking for a high performance battery that’s still a little bit more affordable you should consider the ODYSSEY PC680 Odyssey Battery.

The Optima RedTop AGM Battery allows you mounting freedom thanks to its spill-proof design and a generous warranty that is a year longer than most other companies would offer. However, the warranty reviews are inconsistent, to say the least, so let’s hope you’ll never be in a position to have to use it.