A Bluetooth transmitter is a nifty way to add the Infotainment features of newer cars to older vehicles that predate having built-in Bluetooth capability, turning it into a Bluetooth car supporting hands free calls using your cellular phone and playing music from your device via Bluetooth on your car audio system. The Nulaxy Wireless Bluetooth Transmitter Smartphones is featured in the Best Bluetooth FM Transmitter buyer’s guide, earning it our No. 1 pick as the best Bluetooth FM transmitter based upon its features, performance, and value. 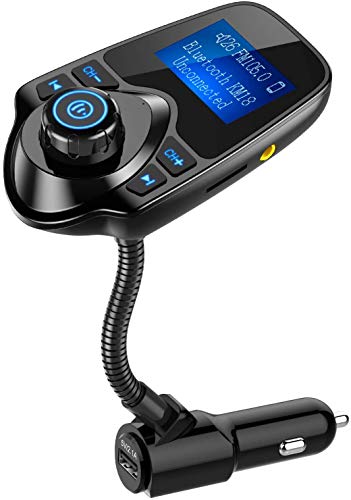 Why We Like It – Nulaxy Wireless Bluetooth Transmitter Smartphones

The Nulaxy Wireless Bluetooth Transmitter Smartphones transmitter outputs a strong signal so finding a clear station is less hassle, and it has a USB port to keep devices charging.

The Nulaxy Wireless Bluetooth Transmitter Smartphones plugs into your car’s cigarette lighter (or what used to be called that) for power, pairs to your BT device, and localcasts to your FM stereo. You then must find an unused best FM frequency to hear the output on your car’s stereo speakers (unused FM frequencies vary by location). Pairing a device and selecting the bestFM frequency are the hardest part of setting up a wireless FM transmitter (thankfully lots of helpful videos on YouTube). Signal strength of the Nulaxy radio transmitter is strong enough to cut through most interference when broadcasting by FM radio to a car stereo. The Nulaxy has a large LCD display and control buttons housed on the end of a flexible goose neck for optimal in-vehicle positioning. A single USB port allows charging a device. If a more compact form factor better suits your car then do have a look at the tiny IMDEN Bluetooth FM Transmitter.

Physical design of the Nulaxy Wireless Bluetooth Transmitter Smartphones is distinguished by the flexible gooseneck allowing the best positioning of the display and controls. There is a large 1.44 inch display that’s a monochrome LCD screen showing who’s calling or what song is playing (so you don’t have to look at your phone while driving). Buttons on the Nulaxy allow you to answer calls, select songs, etc. Nulaxy doesn’t specify which BT technologies they support, but presumed to include the relevant Bluetooth profiles (HSP, HFP, A2DP, etc.) such that the Nulaxy should pair with most any device. There’s also an aux port to directly connect a device in lieu of BT audio connectivity. Nulaxy’s single USB charging port is a must have, but if you want simultaneous charging of two devices (or charging a device while playing music from a USB storage device) then look at other FM transmitters such as the VicTsing Bluetooth Transmitter Wireless Hand Free which have dual USB ports. Sound quality of the Nulaxy’s Bluetooth audio is pretty good, but entirely dependent upon your car’s quality audio system. The Nulaxy Bluetooth display includes a voltmeter nicely showing car battery status, a feature that also highlights a potential downside. Depending on the vehicle model, power to the cigarette lighter may not turn off when the car isn’t running, so the Nulaxy will draw power from the car battery when the car is parked unless you make sure to turn it off or remove it from the power plug. Otherwise if you’re parked awhile (long weekend, or at an airport, or whatever) then you may have a dead battery and need a car charger when you return.

The Nulaxy Wireless Bluetooth Transmitter Smartphones is reasonably priced considering the delivered functionality. It’s also portable if you drive different vehicles. A far easier solution than an after-market hands free car kit from vehicle parts makers. Nulaxy claims their car Bluetooth FM transmitter is in use by over 2 million customers in the USA. If you’re budget minded then you might also look at the LIHAN Bluetooth FM transmitter.

The Nulaxy Wireless Bluetooth Transmitter Smartphones is a great choice if you’re looking for a quality Bluetooth adapter to add modern wireless calling and Bluetooth audio features to your favorite ride. Making and receiving phone calls via Bluetooth is a snap, and adding such capability with an FM transmitter is far easier than doing so with after-market car kits.