A great wireless surround sound system is hard to come by—at least one that isn’t overpriced. The JBL Bar 5.1 finds a nice middle ground between performance, price, and features. It’s wireless, 4K compatible, and works with Dolby Pro Logic II and DTS for providing great sound quality. It’s one of the best home theater systems if you prefer wireless. 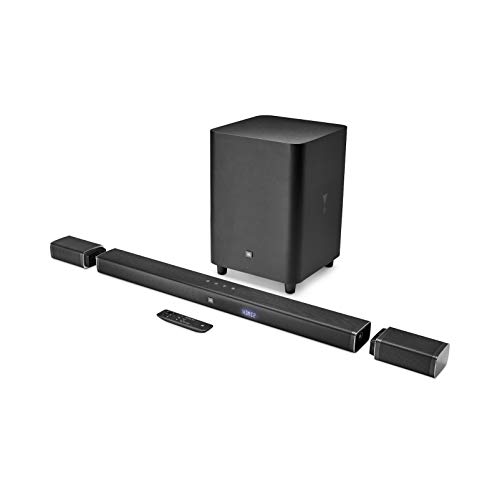 A nice middle-of-the-road wireless surround system with lots of great sound, accuracy, and a unique design. It comes ready with several HDMI ports, and compatibility with 4K devices.

Given JBL’s history in the past, we went in expecting good sound quality and were surprised that it wasn’t good, but great! The JBL Bar 5.1 Surround System really brings the heat to wireless surround sound, having a nice balance between bass, trebles, highs, mids, and lows. The Polk Audio Magnifi Mini had trouble giving treble a nice punch. However, we didn’t like the lack of EQ controls on the remote control. Still, having access to Dolby Digital, Dolby Pro Logic II and DTS is a must. Its ability to connect to 4K ultra HD devices was a plus in our book. And if you lose your remote, you can connect your TV remote, easily.

The JBL Bar 5.1 Wireless Speakers have quite a unique design. It isn’t just a single wireless subwoofer and a sound bar; two small battery powered speakers can be detached from the ends and placed nearby. In the back, the JBL Bar 5.1 Wireless Surround Speakers come with not but three HDMI ports. This allows you to plug in, say, your Blu-ray, game console, and TV all into the main soundbar with separate HDMI cables. Got an optical cable instead? There’s an optical port too, as well as HDMI ARC.

Now let’s talk value. The JBL Bar 5.1 is a great surround system—that we won’t dispute. But $482? JBL might be asking just a little more than necessary. For starters, it has so-so build quality; the plastic feeling and look doesn’t quite match. On the other hand, it’s better priced than the Nakamichi Shockwafe Elite Home Theater System. It has great performance, but if you want the right price for a surround system, the Logitech Z906 5.1 is perfectly priced.

If you’re someone who doesn’t fiddle with EQ settings, you’ll love the JBL Bar 5.1. Aside from a so-so build quality, that didn’t stop the surround system from delivering great sound, both in terms of bass and treble—especially with Dolby Pro Logic II and DTS. We also applaud its efforts on a very unique design with its detachable speakers.