I gotta be straight up: I’m not a minivan guy. I have no kids, rarely do I drive around more than 1 other person at any given time, and long have I loathed the general aesthetic that comes with this type of car. And because of that, I believe I might be the harshest critic of the all too cliche family vehicle.

However, much to my surprise Honda’s all new Odyssey – the 2018 model year to be more specific – is an all around great car. In fact, I might be understating it a bit by, well, stating that. It’s packed with tech, relatively speaking, drives well and fits everyone, adults included, with comfort, as attested by my cohorts who reluctantly, said no one, joined me on a trip to the Big Island. Yes, full disclosure: Honda flew all of us out there and put us up for 3 nights.

So what’s first? The drive quality. The 2018 Odyssey is a solid driver head to toe. It’s long and big, but doesn’t feel it in any scenario. Even my girlfriend, who was reluctant to park it, had no problem parking it at the end of a beach road and slotting it between two tightly packed cars. On the highway it’s effortless to drive. And while many of you might expect it to be as such, take heed, because not all cars, even the luxury ones are built equally. Of course, with this, there is a slight take; the ride isn’t as supple as a BWM 7-series or a Range Rover, but nor should one expect it to be.

Related:  If you like this car, I guess you will also want to read our Honda Civic Si 2017 Review Adaptive Suspension At 23900. As for off the line power (and sound) it’s everything any family would ever need. I had the benefit of comparing it against Chrysler’s latest minivan, and while that was fine, the Odyssey sounds and drives better, albeit marginally in the latter of the two. That in mind, the Odyssey’s tech package is tighter, better executed as is the interior and stylings of the car.

It’s well appointed, for a minivan. The leather, while not anything to write home about, will make cleaning up spills and so forth easy. There is of course a non-leather option. And with that in mind, we were in the top end of the class, so we had all the accoutrements. Aesthetically, though, I didn’t mind spending time in the cabin of the Odyssey.

The traditional gear selector is gone and has been replaced by buttons located on the center console below the 10.5″ system. It looks some acclimation and elicited some hoos and haws from my co-pilots, but nothing they couldn’t live with. Everything is in reach, though the volume knob is to the far left, making it difficult for those sitting in shotgun to control the volume.

Related: Find one of our favorite cars in this 2012 Kia Rio review.

The center seat in the second row can be removed allowing for two captain’s chairs that can be placed together or set apart.

The second and third rows are both comfortable, even for long drives. If you’re considering an SUV over the Odyssey, take note of the SUV’s back seats. Usually the third row is a joke, at best, affords no leg room, headroom, or accessibility. It’s because of this I can now see why one would opt for a minivan over an SUV.

Those who are sporting a compatible device, will enjoy wireless charging for a single phone in the center stack. It’s compatible with two different types: Qi and PMA.  Again, our Odyssey was of the Elite class, so if you’re looking for these types of features, make sure you double check with your dealer.

The infotainment system. This is a biggy. If notes and memory serve correct, the Android based infotainment system, skinned with a Honda GUI, is not available on all classes. However, most Odysseys will sell with this, which also includes CarPlay. And no, I didn’t get to test the step down. Nevertheless, it was quick, functional and fairly easy to navigate. All the usual features and app you’d expect are there, even a nav app, though with question I was able to determine that it won’t receive OTA (over the air updates) so you’re still better off using your phone if you’re looking for the utmost in accuracy. I did find out that Honda will update this info, in service, 4 times during the life of the vehicle. But don’t get me wrong: we used the nav to return to our hotel and had zero problems.

What’s really cool, is that Honda has created their own smartphone app that connects to the car’s stereo and HVAC system. So occupants, with access granted – only one at a time – can control the HVAC system and what’s playing on the rear entertainment. They can only send directions to the navigation, which is good, because the car’s main screen locks you out when the vehicle is in motion. I was frustrated by this, but after talking to Honda they do this to be in full compliance with set standards, though it’s not a legal stipulation. On that note, there is a WiFi in the car, and if you have a compatible plan with AT&T you can share data with the car’s occupants – it’s easy to setup and get going.

Another notable feature, beyond the aforementioned, is Cabin Watch, which let’s you view, via a camera in the Odyssey’s ceiling, what is happening in the second row. It’s complemented by a PA system (Cabin Talk) that let’s the driver or co-pilot speak to the occupants in the back seat. Provided they’re misbehaving while watching the 10″ rear entertainment screen that flips down from the ceiling, plays via a Blu-ray player in the front and works with the included wireless headphones.

Lastly, and not new for this year, is a built-in vacuum system in the trunk. Unfortunately, I didn’t get to suck up crumbs, debris or anything in between. But I think it’s a brilliant addition and could sway any parent with little, messy, kids. It’s just too bad it doesn’t include a shampoo function as well.

If there are any draw backs to the Honda Odyssey it’s possibly two things. One is a given in any case, and if you haven’t figured it out that’s price. The Honda Odyssey, at the top end draws in close to $47,000. Course it starts at $30,000 so there are options. The other draw back you ask? The HVAC system is excruciatingly loud no matter what intensity the fan is set to. 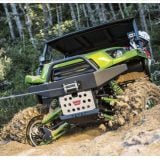 Car Garbage Can By Lebogner Review