The brand CAT (or Caterpillar) is synonymous with being the best in terms of heavy construction machinery. As a major player in that industry, it was only logical that they also put out a jump starter to use in the event that a dead battery would need to be revived, and this need was very well met by the CAT CJ3000. The CAT CJ3000 is a heavy duty car battery charger that can be used to jumpstart a wide variety of vehicles including trucks, with credit to its impressive peak amp of 2000 amperes. The CAT professional jump starter is well suited for working even in the harshest of weather conditions thanks to its Absorbed Glass Mat internal battery, so you shouldn’t worry about being unable to start up your car in the extreme cold. To see what else this 2000 peak amp jump starter also features, and whether it deserves a spot on our best jump starter list, be sure to get to the end of this review. If you’d rather have a full kit, take a look at our JumpStart portable vehicle jump starter flashlight and power bank review. 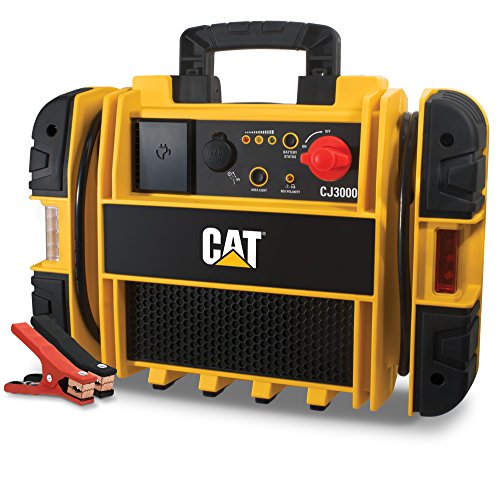 At 2000 peak amps, the CAT CJ3000 is a powerful jump starter that is sure to get your car or truck running in a matter of seconds. It comes with a power switch that regulates flow to its clamps, and a 12 volt DC outlet to charge your accessories.

Although the manufacturer doesn’t mention how many jumpstarts the CJ3000 can do on a single charge, it would take you about 15 hours of charging to get to peak battery capacity, which is pretty long compared to the Noco Boost Plus GB40 which needs a short 15-minute charge to jumpstart a vehicle. In spite of that, the CJ3000 offers 1000 instant amps to get smaller commercial vehicles running, so if you own such, you’ll probably never have to max it out at 2000 amperes.

Just from its size, you should be able to tell that the CAT CJ3000 isn’t as light as most of the other jump starters you’ll find in the market. It weighs about 23.5 pounds, which is a lot heavier than the Beatit G18 for example at 1.3 pounds. Despite the weight, it comes with 48-inch jumper cables for longer reach, which cannot be said for the G18. Also noticeable is the battery charger’s red emergency flasher on its right side, and its area light on its left. These two additions make things a bit easier especially if you’re dealing with a car battery problem in the middle of the night.

At 2000 peak amps, the CJ3000 is definitely a powerful tool that needs a lot of caution whenever you’re dealing with. As a safety feature, the CJ3000 comes with a reverse polarity alarm that sounds whenever you have the terminals wrongly attached. It also has a power switch that prevents power from getting to the clamps until you’re ready, and this is a nifty feature that you won’t find with other jump starters such as the Clore Automotive Jump-N-Carry JNC660.

If you’re thinking about buying the CJ3000 but you’re really sure yet, maybe going through a couple of customer reviews over at Amazon.com might help you make that final decision. Also, being a well known brand, CAT’s customer service is top notch, so you shouldn’t have to worry about any issues if you come across a situation that forces you to claim its 1 year warranty.