Coming with the Amazfit app pre-installed, the Amazfit Bip can start activity tracking basically from the first moment it’s your. Overall a good smart watch, and according to some, it is even in the same league as the Fitbit Charge 4 which you can find on our best fitbit list. 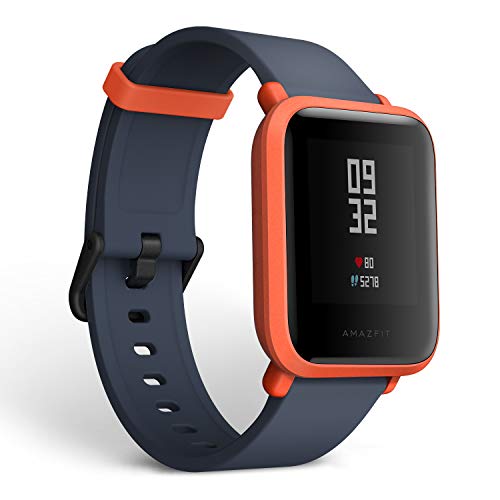 The Amazfit Bip is a head turning watch that even once you learn that it isn’t an Apple Watch, is still worth your attention. It’s not the most robust offering, and while it certainly can’t compete with the more expensive options like the Fitbit Versa 2, you’ll likely be impressed with just how much bang you’ll get for your buck.

Regardless of location if you’re outdoor running or just taking your every day nap the built in heart rate monitor will know and the sleep tracking will even record the later. The battery life has been described as incredible with a single charge getting you close to a 45 day battery life, don’t forget that’s with the watch faces being on. The fitness tracking has received some critazisalm however as it doesn’t stop counting when you stop jogging to get a drink like some other fitness tracker might.

Related: If you like this fitbit, check out our Fitbit Flex review the 100 Nike fuelband.

It looks like an Apple Watch. But upon closer inspection, a closer parallel might be something more like the Fitbit Ionic. It has a built in battery saving to put the lights to a light sleep.

Related: Also check out our Garmin Forerunner 245 music review, if you want a watch with a lightweight design and great battery life.

With it’s built in integration to the Mi Fit app the Amazfit Bip Smartwatch manages to compete with even the Fitbit Inspire HR which is in the same price range for fitness trackers, the music control is a must but not all can say they have it like the Amazfit Bip can.

The Amazfit Bip is the best fitbit style smart watch for those who want to look like they bought a high quality item but don’t want it to just be for style but rather have both function and style, even if it isn’t always the most simple product to use when it comes to the UI and functions.