The Seagaia Ocean Dome Was The World’s Largest Indoor Beach 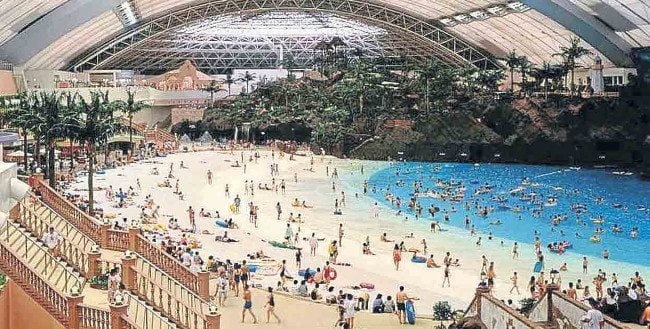 Humanity has a thing for putting things that should be outdoors indoors. We have racks of bulbs firing off UV rays to tan us. We’ve got fish in glass cages to swim for our amusement. And, for a decade and change, we had an enormous beach, indoors.

A Beach Away From The Ocean

The Seagaia Ocean Dome was a ridiculous complex construct that was opened in Japan in 1993. If you’ve ever been to a waterpark, remember the wave pool? It was like that, except in a massive hangar, and with a whole host of tools to pretend you were living in a tropical paradise, from a fake rock lagoon that would erupt with “lava” to artificial white sand. It even had a retractable roof, so on rainy days you could still pretend you were beachcombing, and on sunny ones, it would shine through.

Why even build this in the first place? Partially because Japan was flush with cash it didn’t know how to spend. ’80s kids might remember that everybody was worried that Japan was going to take over the world with their superior manufacturing, video games, and severe cultural differences from the West. The Sea Dome is arguably a symbol of that excess, not least from where it was located: The entire construct was, weirdly, less than a mile from an actual beach. Unfortunately, the Seagaia Ocean Dome closed in 2007. There were a variety of reasons behind it, like the fact that you didn’t have to fork over twenty dollars a head to get into the real beach you could get to with a short walk, and a giant hangar is expensive to keep at 86 degrees at all times, especially with a sliding roof.

But we’ll always pictures, and a reminder that yes, absurd yet cool things can have a life on this world, however brief. Best Kayak for Beginners in 2023