If you’re looking for a thin and light gaming laptop then Razer Blade Stealth 13.3 Gaming Laptops should fit your needs so long as you’re not playing graphically-intense video games. Don’t get me wrong, it can still handle them, but you’ll need to scale down the performance to get them to run smoothly. 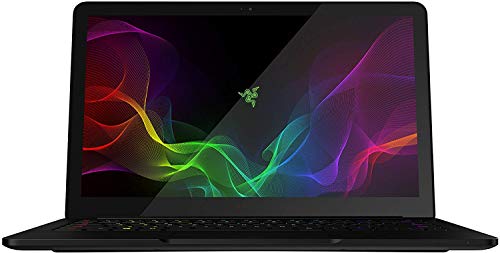 The Razer Blade Stealth 13.3 is a powerful laptop capable of acting as both a gaming laptop and a work laptop. More of a 2-in-1 than it is a dedicated laptop one way or the other. Still, Intel Core i& processor is powerful, and the 16GB of RAm means no slowdowns if you need to have multiple windows or programs running consecutively.

The Razer Blade Stealth 13.3 Gaming Ultrabook contains an Intel Core i7 processor, a non Max Q Intel Iris Plus integrated graphics card, and 16GB of RAM. While the graphics card may not be the most powerful in Nvidia’s arsenal, it’s still powerful enough for full HD gaming performance at over 100FPS for easy graphics and 36-48FPS for graphic-heavy games. But you can try the Acer Predator Triton 500 RTX 2060 if you’d like something more powerful.

The cost of graphics is battery life. The Razer Blade Stealth clocks in at about nine and half hours of battery life, so no worries about bad battery life. This is much better than most budget gaming laptops, and the Stealth is considered a premium laptop and the average battery life for premium’s is around 10 hours. A little shy, but still good if you’re mainly using it for light gaming and even beats out the Gigabyte Aero 15.

The Razer Blade Stealth may be a laptop of few ports, but that doesn’t mean it’s not friendly to other usages other than gaming. A total of two USB-A 3.0, one USB C 3.0, oneUSB-C 3.1 with Thunderbolt 3, and an audio jack grace the keyboard split between the left and right side. The Wi Fi is Intel Wireless-AC 9560. Check out the Asus Rog Zephyrus S Ultra Slim Gaming Laptop for another example of great port and connectivity features.

You’ll be getting the same quality Razer construction with this ultrabook as you did last year and the year before. Trackpad is fantastic, the keyboard feels great for both typing and gaming, and the laptop itself is lightweight and easy to carry around. However, the overall ‘feel’ of the laptop gives off more of a 2-in-1 vibe than it does a gaming laptop. Probably because the black and green color scheme has been ditched for this version.

The keyboard is bright and colorful with a single zone RGB lighting effect that’s customizable with pre-installed Razer software. An HD webcam also makes the computer compatible with Windows Hello. However, the 256GB of storage is nothing short of baffling for a gaming laptop, and although the computer isn’t currently available on Amazon those who do carry it aren’t selling it for cheap. And a lack of a discrete GPU makes playing higher-end games slightly more challenging.

The most baffling thing about the Razer Blade Stealth laptop is the pitiful 256GB of storage it has. Even most previous-generation gaming consoles have more storage than that so it’s still a mystery as to why Razer would include it here. If I had to guess, it’s probably because they intended it to be used for light gaming and work. And for those, hefty storage isn’t entirely necessary.