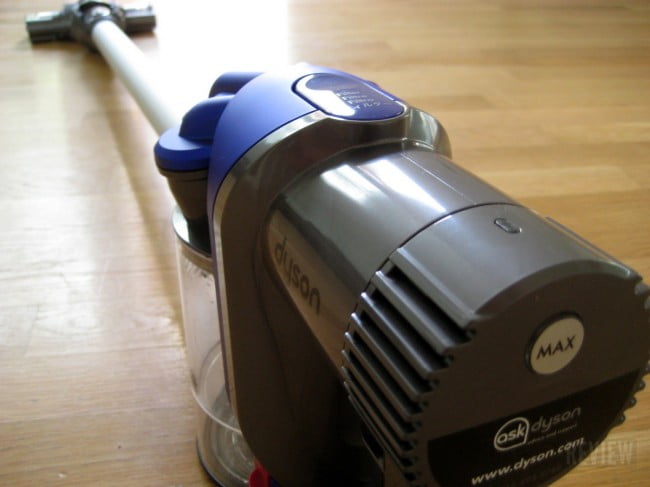 If you are searching for the best Dyson vacuum, have a look at this model. Or you could give our Dyson DC39 Multi Floor vacuum review 2 a read.

In most, if not all instances I’d probably shove my nose at the opportunity to review a vacuum.  But Dyson, needless to say, isn’t your ordinary vacuum company.  Unlike Oreck, and other companies of the same ilk, Dyson has managed to curate a product that is both heavy on utility, yet is strangely attractive much like an iPhone or gleaming new laptop computer.  You know what I’m talking about if you’ve seen any of their TV commercials, or all black packaging.   Dyson stands above the rest thanks in large part to their unique design, but with that comes the caveat of a significant price tag the wards off the average Joe or uneducated shopper. If you’ve got a really intense mess to clean, you might also want to read our review of the Dyson 360 Eye Vacuum bolt (to hit Japan at a steep price) too. While Dyson is popular, some prefer the best shark vacuum.

However, the DC35 is arguably the most practical of vacuums that the company sells.  It’s small in size, can be used in a variety of scenarios, and much to my appeal doesn’t need to be plugged into work – I long ago gave up the corded vacuum since that’s the most bothersome part of cleaning a room.  That said, the Dyson runs on a battery, which needless to say must to be recharged.  So the cord hasn’t been negated all together, and since battery power is limited – about 15 minutes on single charge – the DC35 is not ideal for anyone with more than a 1000 square feet.  However, it’s the perfect complement to a plugin vacuum, as it can reach places a traditional vacuum can’t, and can be used to clean your car, ceiling, or any where there isn’t an socket handy or within reach. 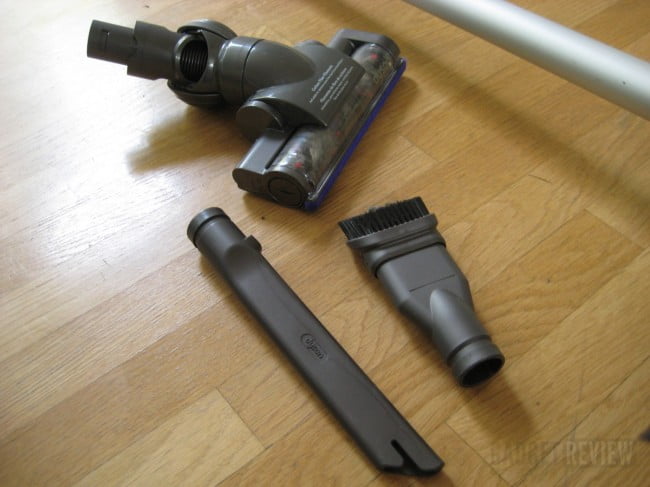 Included in the package are a three attachments fit for a variety of scenarios.  First and foremost is a floor vac attachment that boasts a spinning brush ideal for carpets and hardwood floors thanks to the combination of nylon and anti static carbon fiber bristles.  The spinning brush can’t be toggled on or off, so battery life will diminish a bit faster with this attachment in place, though Dyson’s digital motor showed no signs of lagging with it in place.  The long-reach wand doesn’t need to be attached, but it’s ideal for cleaning floors with the motorized brush attachment.  It is also useful for reaching, well, hard to reach areas, such as the corner of a ceiling.  Also included is a non-motorized brush, which is good for cleaning dusty surfaces, or underneath seat cushions, though you can remove its bristles and use it to cover small areas, such as underneath a sofa cushion.  Lastly, there is a skinny tool for getting in between crevices, cushions that can’t be removed from your sofa, or cleaning up crumbs that lurk underneath your counters at the kitchen’s kickboards.

If you can spare the space, which I couldn’t, Dyson provides a wall mount that integrates with the included charger and allows you to “float it” on your wall in an upright position.  I instead simply opted to pull the charger out from a drawer, remove the battery, which mind you is simple as pie, and plug it in for a charge – an LED indicator light on the AC pack changes from red to green when it has completed the charging cycle after 3 hours. 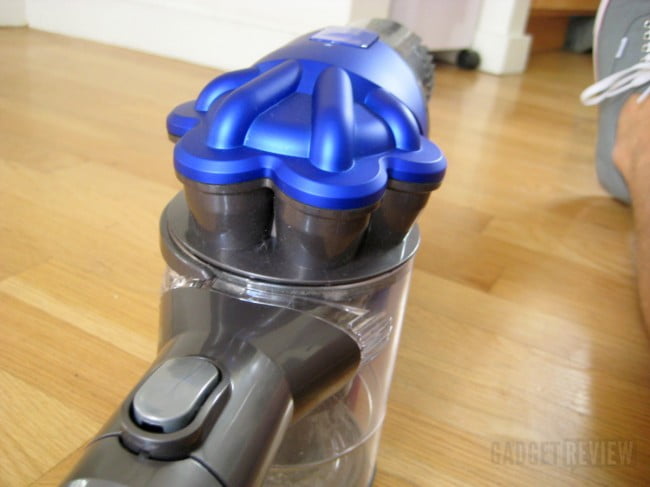 Aesthetically, the DC35 bares the familiar Dyson look.  And by that I’m referring to the brightly colored valves that sit atop the transparent canister and contain Dyson’s patented Root Cyclone technology.  A red lever placed on the left side of the canister pushes down to open the canister door and makes emptying the DC35’s contents quick and easy.  Most of the debris collects at the bottom and falls out thanks to gravity, but occasionally requires some coaxing if it’s not heavy enough to pull its own weight – this happened more often with dog fur and dust.

Housed between the Root Cyclone, or the Blue portion of the vacuum and the handle is a washable, reusable filter.  That’s right, you won’t have to buy a new filter every few months, unlike some other vacuum cleaners, though many make aftermarket reusable ones nonetheless.  Instead, you’ll be able to clean this one with water, let it dry and then place it back into the DC35 as if it we’re new. That said, during my testing, which was over the course of 8 weeks, I didn’t have to clean the filter, but keep in mind your mileage will vary with use.  I live in a 3 story town house, but the square footage doesn’t exceed 1200.

Unlike a traditional vacuum cleaner, which boast an on/off switch, the DC35 uses a trigger, much like a gun.  In fact, the design of the DC35 is more dust buster thanks to its small size and battery powered motor, though its suction is more analogous to an upright vacuum.   Nevertheless,  because of the trigger you must hold down, or squeeze while cleaning, otherwise the vacuum turns off.  Now, many will regard this as a nuisance, and in some regards it is.  Yes, it would have been nice to have seen the inclusion of a locking feature that leaves it turned on, but the silver lining of this caveat, is that you’ll in theory save on battery life.  So when you place it down, or move from location to location, you won’t needlessly burn power from the removable battery.    The trigger isn’t feather light, but nor does it require an overly heavy hand.  However, for those extended cleaning sessions it can become a bit grueling to hold down, and on occasion my finger slipped up despite my best efforts to keep it squeezed. 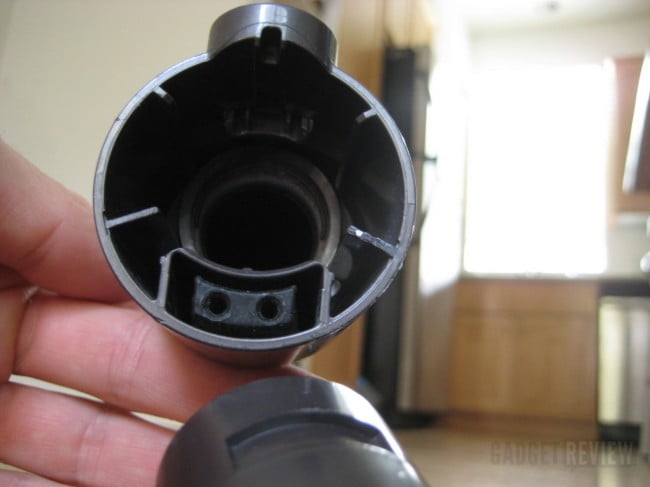 On the back of the motor is a “max” button.  Push this and it ups the suction.  Exactly how much is hard to determine, but since it cuts battery life down to 6 minutes from 15, it’s safe to say it at least doubles the suction of the DC35.  This is further indicated by a much louder motor noise and an increased speed at which hard debris travels through the vacuum’s plastic housing.   Dyson says you’ll want to use this feature on tougher jobs.  Sure, you’ll need to determine what those are on a case by case basis, but really anything that is heavier than the average debris will probably qualify.  In other words, it won’t be often you shall have to resort to using this feature, but when you do, clean quick because your battery life is very limited. 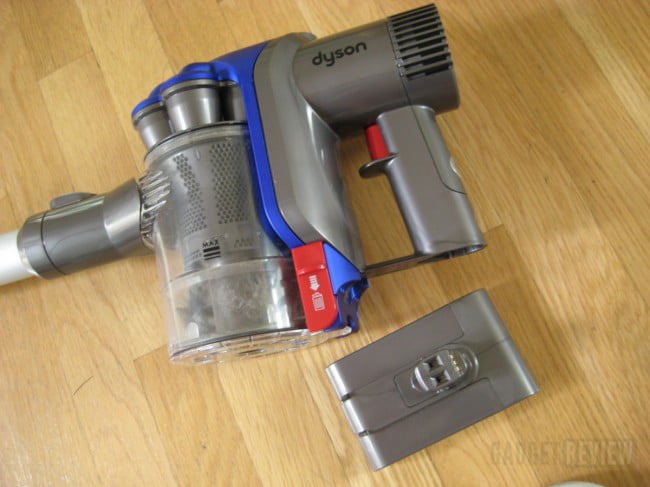 The included attachments sufficed in 90% of my cleaning scenarios.  But there were a few instances where I wished it had a bendable neck for reaching around small corners.  Course, that’s anything but a major caveat as you can use the DC35 as a dustbuster; just remove the long wand option.   Furthermore, the motorized floor tool not only has a very low profile, but a articulating head that can rotate 180 degrees and allowed me to easily clean underneath my queen sized bed, where I discovered a large stash of feathers that had collected from my down pillows and comforter, not to mention dust bunnies.   With that low profile build comes a draw back, which is a low clearance that instead of sucking up dog food made for a 6lb mut, just pushed it in front of it.  The resolve?  Lifting and backing over it, or removing the motorized brush all together.  That said, much like any motorized brush vacuum, the DC35 collected hair around its brush.  And while it didn’t impede upon my cleaning during my testing, it could be a matter of time until you have to remove it by hand. 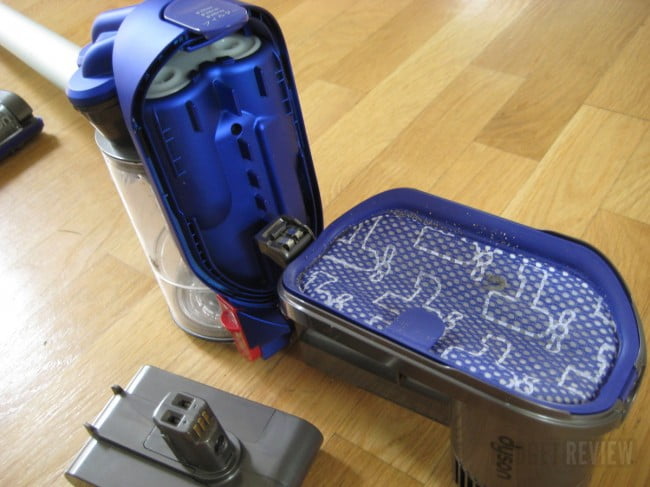 In terms of reaching ceiling dust bunnies, the kickboard of kitchen counter tops, and cleaning up odd jobs around the house, the DC35 performed better than any other cordless vacuum that I’ve used.  Bake into the fact that it is powerful enough to suck dust that hides beneath your carpet, and light enough to be carried from floor to floor without a back breaking experience, and you’ll begin to realize that its $300 price tag is not just rooted in utility, but peace of mind.

Bottom line: A vastly useful vacuum that not only put the kabash on dust and debris, but should be proudly displayed for all to see. 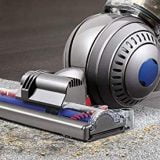 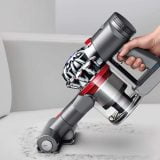 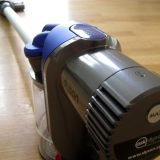 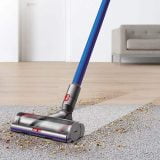 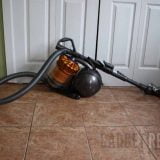 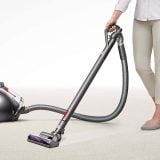