If you want to have some fun while shopping for televisions, ask the salesperson to give you a rundown on 120Hz vs. 240Hz vs. 60Hz … then sit back and be ready for several minutes of rambling explanations. While refresh rate is an important component of the performance of televisions, especially large screen televisions, it’s also the most confusing aspect of attempting to purchase a TV. Or even the best smart TV.

Different manufacturers quote different refresh rates, some of which are called “effective,” some of which are called “active,” and some of which are fancy-sounding branded names (see Samsung’s Clear Motion). It’s almost enough to make you wish for the days of bulky CRT TVs. Fortunately, a bit of basic knowledge concerning TV refresh rate can be carried from brand to brand and model to model. Refresh rate isn’t the only factor to consider for a good TV, however. Resolution is important as well. Thankfully nowadays, you only really have to worry about 1080p or 4K, at least for a few more years when 8K starts to become a real player in the market share. However, before 4K became a mainstay, there were multiple resolutions you had to compare, like HD and WXGA vs full HD TVs. Obviously, full HD beat out the others as it has a clearer image, and 4K beats full HD for the same reasons. Eventually, 8K will do the same.

What Is TV Refresh Rate?

Refresh rate refers to the number of times a second that the television screen refreshes or redraws itself. Even though the video on your television appears to be a smooth running, constantly moving video stream, you have to remember it’s a series of still images that change quickly enough to give the impression of movement. The refreshing of the screen isn’t something you’ll necessarily notice when you’re watching television, as the changes occur too quickly for the human eye to notice them … as long as they’re operating as intended.

And that’s where the TV refresh rate enters the picture. The more often the large screen TV is able to refresh the picture per second, the smoother the video will appear. If there’s a hiccup or lost frame in the video sequence, that’s when you’ll notice it.

An inadequate refresh rate also may manifest itself in a slight blur when fast-moving objects are shown on the screen, such as with sports programming. And remember that a 4K television has about four times more pixels to calculate and draw during each refresh than an HD programming on an HDTV, which means using faster refresh rates on a 4K TV becomes more complex, requiring more processing power. Additionally, you will want a TV with low input lag, especially if gaming is important to you. You can read our resource on input lag TV vs monitor to see which will be a better choice for you. And if you are a gamer, you may want to look at these top-rated HDR TVs to ensure that you have great color range and brightness to bring out the best in your games.

Refresh rate is important in a television that relies on LCD technology, just because of the way the individual pixels in an LCD light and the amount of time it takes to change the light in LCD pixels, as well as the way the LED backlight works behind the LCD screen. The newer OLED display technology does not suffer from problems with motion blur, and the refresh rate is not measured in OLED units.

Some people are more sensitive to motion blur in an LCD TV than others. The best way for a manufacturer to deal with motion blur is to increase the refresh rate of the screen, and that’s where 60Hz, 120Hz, and 240Hz enter the picture.

Some HDTVs, especially those from several years ago, would duplicate frames to fill in the missing frames. So if a video was shot at 30 fps and the TV had a 60Hz refresh rate, it would just show each frame twice in succession. The human eye wouldn’t be able to see the duplication. However, this technique didn’t really do much to reduce the problem of blurred motion on LCD TVs.

Another option is to blank the LED backlight in the LCD television between frames. This must be done quickly to avoid a noticeable flicker in the video. So rather than filling the blank frames of 30 fps video with a 60Hz refresh rate with a duplicated frame, the extra frames would just be black.

So if you’re displaying 30 fps video on a 60Hz refresh rate television, the software in the TV would create one extra frame that would fit between each pair of frames. The pixels in the software-created frame would basically be an average of the pixel positions of the “real” frames that surround it.

When you’re looking at 120Hz vs. 240Hz TV refresh rates, the interpolation technique becomes even more popular. A 120Hz TV would need to create three frames between each pair of frames from the 30 fps video, and a 240Hz refresh rate would need to create seven frames between each pair of frames in a 30 fps video. This technique works very well for fast-moving subjects, allowing the LCD to perform better.

Some people don’t like the way the interpolated video looks, as it’s almost too smooth. Still, these faster refresh rates provide the best means for combating some of the problems inherent in LCD technology regarding motion blur.

Although most televisions claim an ability to reach 120Hz or 240Hz or even higher in a refresh rate, whether they actually offer such an impressive leap in performance levels is up for debate. Each TV manufacturer uses its own software to create the extra frames, and nearly every TV manufacturer uses a marketing brand to describe its refresh rate.

It’s important to understand: There is no standard you can use from TV to TV to determine its actual refresh rate or how a particular unit’s software will perform. Some manufacturers rely on marketing claims when touting a certain refresh rate rather than an actually measured TV refresh rate. And manufacturers will throw exciting brand names on their refresh rates to make them sound like high-performance products.

So when trying to put TVs to the test of 120Hz vs. 240Hz vs. 60Hz, you really have to do some homework. Read the fine print about any marketing claims regarding a certain brand’s refresh rates. Many manufacturers will create explanations for their refresh rate branding on the Internet, which may help with your research. Look for claims of an actual refresh rate rather than an effective refresh rate.

And keep in mind that some people don’t really notice a difference in image quality once the refresh rate exceeds 120Hz. Ultimately, the best way to compare motion blur in televisions and their refresh rates — whether they’re fake, real, or something in between — is side by side in a showroom while watching fast-moving programming, such as sports. How To Fix Black Spot on a TV Screen 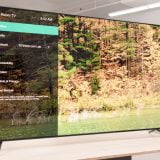