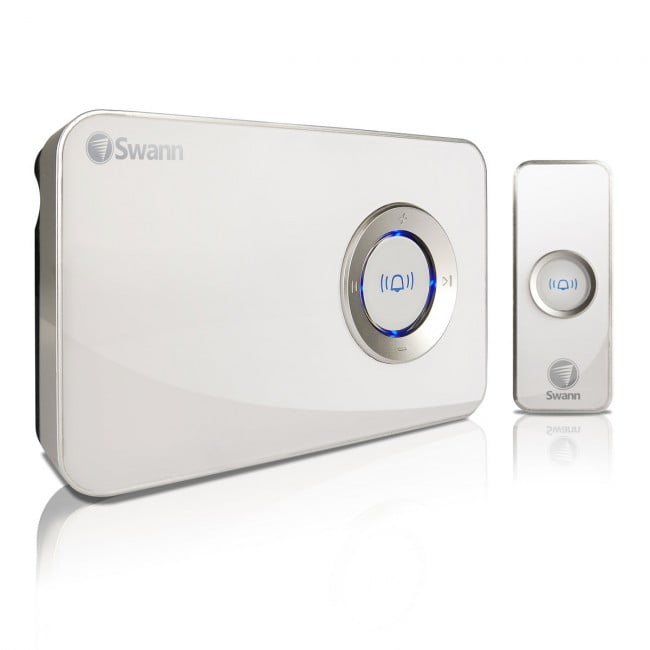 Lucky folks have summer homes while others rent bungalows and some go without but make due by carving out a space in a garage or basement. What’s common to all this is that the person “inside” doesn’t want to hear loud knocking or screaming when someone “outside” tries to get their attention. A walkie-talkie is too retro, so how about some high tech to cover the situation? As in a wireless doorbell that you can program to play whatever you want, instead of just going “ding-dong.” This is one way to get on board with the best smart home devices.

That brings up the Swann MP3 Doorbell SWADS-DOORCH which, astounding as it must seem after hearing the name, plays MP3 files. The whole thing is self-contained, easy to use and eminently suitable for portability when traveling. For your information, watering your garden just got better. You can now install a smart hose timer that can optimize your water usage. Read more about it in our Orbit b hyve smart hose faucet timer review.

We all know what a doorbell does, and how it does it hasn’t changed: a person’s finger (or knuckle or fist, if very angry) presses a button which then cause a “sound” to be heard. There’s mechanical doorbells and doorbells with video cameras, but a doorbell that plays your favorite tunes — or appropriately chosen audio like Schwarzenegger saying “I’ll be back” or otherwise is much more fun. So lets set the Swann MP3 Doorbell SWADS-DOORCH up, shall we? 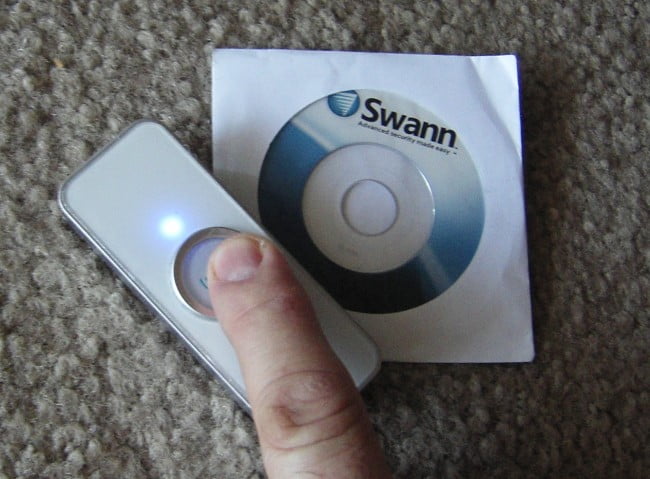 The first thing to do is determine where you want the doorbell to go: this contains a battery to power the transmitter, obviously, but also features a subtle blue LED that illuminates each time someone does the pressing. The back of the doorbell comes off with a little prying of a small flat-headed screwdriver, and can be mounted to a wall using wood screws (providing it’s wood that it is to be mounted to) or metal screws, etc. Should you prefer not to mar the surface, leave the back on and go with sticky tape — it’ll will work for a while or, to go a bit overboard, you can apply silicone sealant (that can be pulled off later) around the doorbell to secure it (it’s a long-lasting battery, after all). I’d put it out of sight of your Mancave, since it works wirelessly after all. Would you like to install smart shades to match the decor in your home? Read about great custom shades in our Serena shades by Lutron electronics review.

Popping off the back of the receiver, I can see where three “AA” batteries will be inserted for power. To the side of the battery compartment are important things. Things such as two tiny nub switches; one will turn the receiver on/off while the other switches between internal memory and external. Pre-programmed ringtones are in the internal memory and are controlled from the other side — we’ll get there in a bit. But to be cool, you go with the SD card and switch that nub to MP3. I should also mention that there’s a micro-USB socket nearby. This is used to connect to the SD card in the receiver (although you could use a card reader instead) and also will power the receiver sans batteries. Swann suggests you DON’T power the receiver through USB with the batteries left in. I concur as there’s always a chance of a problem occurring, and the 10 seconds it takes to pull out the three batteries won’t get deducted from your life by Saint Peter. That’s why it’s easier to use the SD card independently, unless you plan to keep the receiver by a computer/USB source at all times. Oh — there’s a nicely sized speaker next to the battery compartment for the sound to exit from, don’t-cha know. 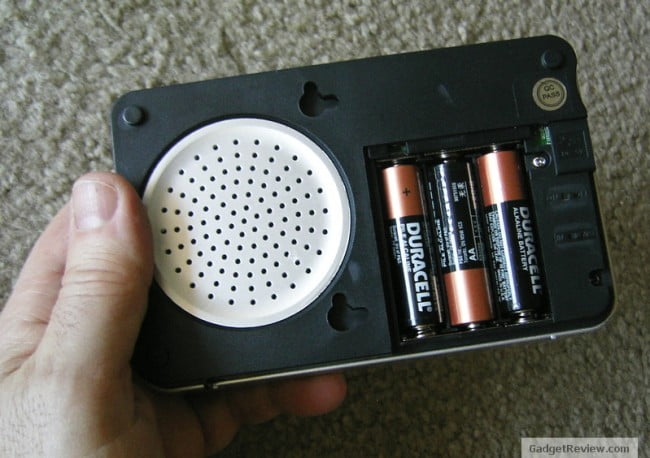 Turn the receiver over (with the battery compartment reattached) and it can sit on a table — you don’t have to wall mount it unless you really want to. The large “button” inside a silver rim serves a few purposes: it lights up when the doorbell is pressed as the audio plays, and controls the start/stop of anything playing. Press the left side of the rim to cycle back one audio file (i.e.,“song”) or press the right side to cycle to the next. Pressing the top/bottom of the rim controls the volume.

Swann gives PC users a program to edit/modify/copy audio files to the SD card (it’s on a disc). But drag ‘n dropping files onto the SD card will work just as easily, although you’ll have to manually organize the order yourself then. Swann also suggests avoiding audio resolutions that are too high or low, and of course digital rights managed files (DRM) are a no-go. Best scenario is to use MP3 files that are encoded at 128kbps. Guess I should add that Mac users, as well as PC users, can just go with an audio program that is at hand to take care of business — Audacity will work well here, for example.

At any rate, once the SD card has been filled with audio files, you unmount it from the desktop and disconnect the USB cable from the computer and from the receiver. Now you’re ready to rumble (hey, that would make a good doorbell “ringer”!). 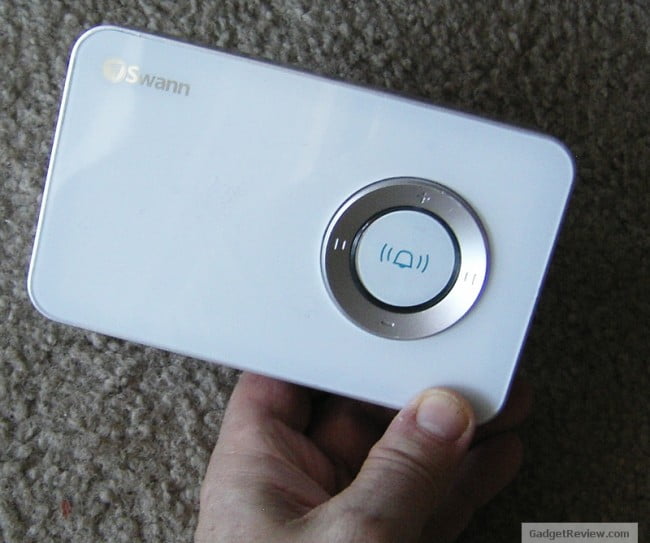 But before I secure the doorbell, I want to make sure the wireless signal will reach the receiver where I’m going to be placing it. Swann says it should work up to 50 meters — let’s see how it does with feet.

So I place the doorbell by the front door and head across the living room and out on the balcony. Total distance, aprox. 90 feet. I have my wife press the doorbell and, as she later tells me, about 2 seconds later the audio file starts playing on the receiver as the dial twinkles with blue LEDs. Cool. And it turns out that the delay doesn’t seem to be distance-specific, as the amount of time between the doorbell being pressed and the receiver responding appears to be the same regardless.

Bottom line: The Swann MP3 Doorbell SWADS-DOORCH brings that old standard into the 21st Century. And adds a few bells and whistles to jazz it up with your fav tunes. $49 retail brings some pretty impressive tech to the lowly doorbell. 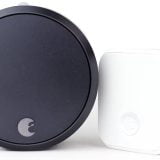 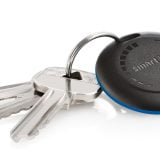 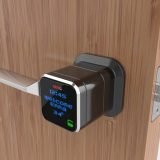 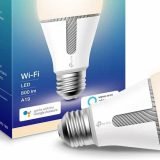 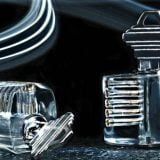 This Clear Acrylic Lock Lets You Learn How To Pick 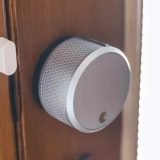