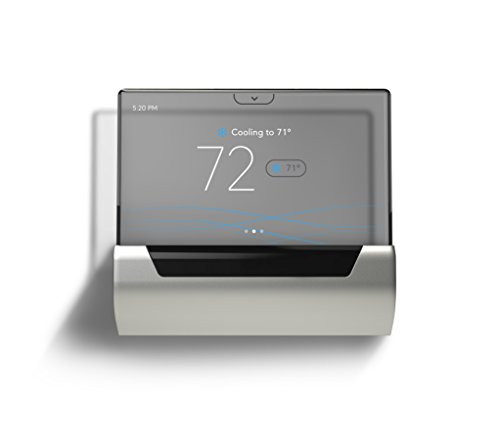 The Glas Smart Thermostat is one cool-looking device, accompanied by Microsoft’s Cortana AI. Its OLED touchscreen is futuristic, along with a unique ability to measure indoor air quality.

When in working order, the Glas Smart Thermostat provides your basic functionality, like temperature control, scheduling, and voice control. Through the mobile app, adjustments can be made; however, the Glas app doesn’t offer more information than the thermostat itself, aside from energy savings. Other than that, it does just fine making adjustments based on your commands, whether be through voice, scheduling, or via the app.

Outside of its basic functionality, does the Glas Smart Thermostat do anything that isn’t expected? It does! The Glas Thermostat monitors air quality, which isn’t something you see in a thermostat often, not even the latest Ecobee SmartThermostat With Voice Control. VOCs, carbon dioxide, and humidity can be monitored, but also offer suggestions to reduce said levels.

The Glas Smart Home Thermostat doesn’t have an always-on display like the Ecobee4 Smart Thermostat does, which means you can’t peek at it from across the room. Its companion app can be a middleman, but you won’t always have your phone on you. Cortana isn’t as robust as Google Assistant, but thankfully it supports Google and Amazon Alexa—provided you have a device to control either or.

How easy it’ll be to install your Glas Smart Thermostat really comes down to your HVAC system. Single-stage heating systems, for example, are going to be leagues easier to connect. Regardless of your HVAC system, it’s still going to be a Trial of Patience, considering the positioning of the wires has been moved lower, rather than in the middle. Having a C wire adapter does help the installation, but only marginally.

Compared to the Honeywell Home T9, the Johnson Controls Glas Smart Thermostat doesn’t perform as well as it should. The Honeywell matches in price, yet has a more fleshed out system and better app performance. You can even grab the Honeywell with a sensor for an extra $40, which the Glas doesn’t even have. If, however, you are on a tight budget, you can try the affordable Nest Thermostat E.

Johnson Controls should’ve taken a few notes from their competitors—especially if it concerns thermostats. Yes, the Glas Smart Thermostat is neat-looking and has the unique ability to monitor air quality; however, that doesn’t excuse the lack of remote sensors and painfully basic functionality. Your choice of leading voice control is also great, but not good enough.

Bottom Line
Reader Rating0 Votes
0
What We Liked
What We Didn’t
9.6
Expert Rating