Lauded as Sony’s new flagship OLED TV in 2019, the Sony A9G is definitely a premium pick that offers pristine picture quality courtesy of its 4K resolution. Everyone agrees that the OLED Panel looks very good, and just like the majority of OLED TVs, the A9G has superior black levels that make watching it a dream from any angle. The Sony TV is available only as a 55, 65, or 77-inch TV, and all models come powered by Sony’s X1 Ultimate picture processor that pushes color saturation to the limit to deliver a rich and well-balanced picture. In terms of sound quality, the AG9 seems like it’s light years ahead of the competition with its Acoustic Surface Audio technology. Why? Simply because it has sound coming out of the screen, which is a new standard. Get to the end of this review to learn more about that and see why the AG9 is a top competitor to the models on our best 4K TV list. For the ultimate in TV, you can’t miss our review of the Titan Zeus (370-inch TV). Or our review of some of the best TVs around. 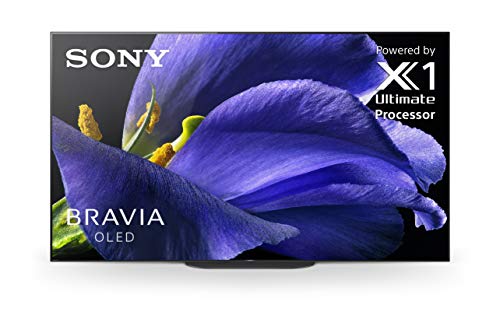 As one of Sony’s best releases yet, the A9G is a top-rated QLED TV that’s sure to blow your mind with its 4K HDR Triluminos display thanks to an X1 Ultimate picture processor. The TV is part of Sony’s Master Series and takes a giant leap forward with its sound system thanks to Acoustic Surface Audio. For a similar design and specced TV, check out our Sony A8G review.

This Sony A9G OLED TV relies on an Android TV platform that exempts you from having to plug in a Roku or Chromecast extension, making it a Smart TV that comes ready with all the streaming apps you’re used to. However, if you would like TV powered by Roku, you can read our review of the TCL 50″ 5-Series 4K UHD Dolby Vision HDR QLED Roku Smart TV. This is also the only area where the A9G deals Sony XBR-A1E a blow, as the A9G comes with an updated version. Otherwise, once you connect the A9G’s remote to the TV through Bluetooth, you’ll also be able to issue commands to Google Assistant by speaking into it (the remote has a microphone) even if the remote isn’t on the TV’s line of sight – a feature that you won’t get with the Samsung Q7F or the LG C9. The AG9’s sound system is also pretty advanced thanks to its Acoustic Surface Audio feature, which uses actuators behind the screen’s glass panel to produce the sound that follows the direction or cue of whatever’s happening on-screen. If you were to plug it into your surround sound system, then the screen would serve as the center channel to balance things out. While not as advanced as the Sony A9Gs sound system, the Samsung QN55Q900RBFXZA QLED offers a premium sound.

Design-wise, not many TVs have the looks to match the OLED A9G. The TV looks stunningly elegant and is only about 6mm thin. To its back, the TV has a flat panel that takes up a checkered design and also allows you to mount it very close to the wall in case you don’t want it placed on its pedestal stand. If you do, though, it’ll maintain a very low profile, sitting very close to its oval base. If you look closely, you might be able to spot the Sony logo that’s visible on the TV’s bottom left, and that’s the only form of branding that you’ll see. This helps keep everything minimalistic, which is the same design blueprint that the Sony XBR-A1E also follows.

As a model that’s part of the Sony Master Series, the Sony A9G OLED is among the best of the best that Sony has to offer, so you should expect nothing less than an excellent picture from this top-spec TV whether you’re viewing Dolby Vision, Ultra HD or High Dynamic Range (HDR) content. It’s not as cheap as the TCL 55R617, but it delivers a respectable peak brightness of 650 nits without distorting its black level and has an input lag of 26.6 ms when you switch it over to game mode. Its sound system comes with inputs for Dolby Atmos, as well as 4 HDMI and 3 USB ports.

The Sony Master Series A9G is easily the best TV for anyone who wants the experience of a premium TV that, as Sony puts it, will allow you to see content as the creators intended. You can go ahead and order the TV from Amazon, but before you do, make sure you go through the different customer reviews to get an idea of what lies in the store. 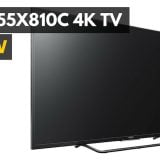 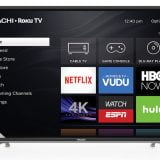 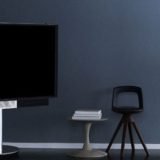 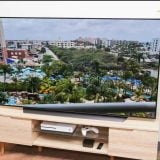 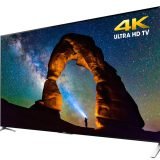 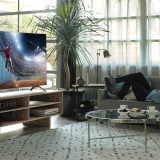