Among dozens of manufacturers, finding the best smart thermostat that does its job without trying to sell you on additional gizmos can be a tough trail to follow. Compare this smart thermostat with the options in our Ecobee vs Nest review. Rather than pay outrageous prices for features you aren’t interested in, the Resideo Honeywell Home T9 Smart Thermostat does its job (and then some) without added baggage and being easy on your budget. If you want a thermostat that’s easy to program, you might want to read our Mysa Smart Thermostat review to compare. 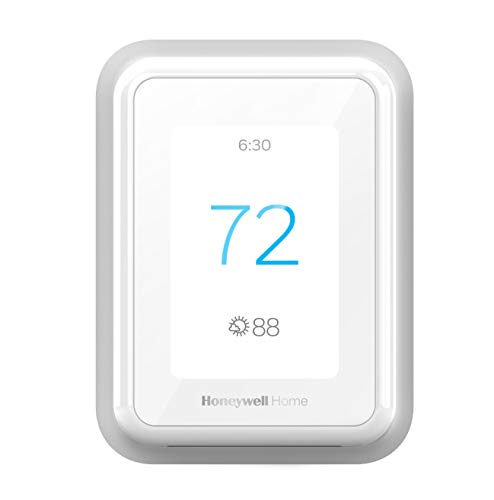 What sticks out the most with the Honeywell Home T9 is its performance compared to other smart thermostats. It’s clear there was a focus on providing precise remote sensors. Tickering with its temperature controls, it’s rather quick to alter the HVAC system at a moment’s notice.

However, it lacks a motion sensor in the main unit. To alter temperature on occupancy, you’d need smart room sensors installed—just one is enough. Since one sensor comes bundled, that’ll usually be used in your main unit. You’d have to purchase additional smart sensors.

You can control the thermostat through the Honeywell Home app. Additionally, voice control is an option with Amazon Alexa Google Assistant, Cortana, and IFTTT, but strangely, not Apple HomeKit.

Aesthetically speaking, the Honeywell Home T9 isn’t quite as modern looking as, say, the Emerson Sensi Touch, but still more modern than the Honeywell Home Wi-FI. To be honest, it’s rather bland in design, sporting a very simple white color. Of course, that by no means affects its performance.

The T9’s dimensions are 3.70 x 4.92 x 0.94 inches, so it’s taller than it is wider, with a display that’s about two-thirds the size of an average smartphone. This thermostat is strictly meant for C-wire configuration. If you don’t have one, you’ll need a C-wire adapter or G-wire jumper.

The best way to gauge the T9’s value is comparing it to the Ecobee4. Both are neck and neck when it comes to performance. Both have sensors that work well, support a wide range of voice assistants, and come bundled with a single smart room sensor. Aesthetically speaking, the Ecobee4 is arguably better looking, but it’s also $100 more. That makes the T9 one of the best deals, especially among the Honeywell smart home devices.

The T9 thermostat Honeywell developed is a solid workhorse that isn’t about to let you down. With how easy it is to set up, you’ll have it controlling the temperature in no time. Through voice assistants, you’ll even control it with your voice. Sure, it lacks a motion sensor, but it comes bundled with a smart sensor anyways. It doesn’t support Apple HomeKit, but it does support four other common voice assistants.