If you are in the market for a top-performing camera ideal for traveling, and don’t mind a retro design, then the best travel camera might just be the Fujifilm X100V. Why? Within its ‘70s shell isn’t old technology—but rather, 26.1 megapixels, 4K video, along with fast-acting internal mechanisms, making it ideal for on the go such as street photography. 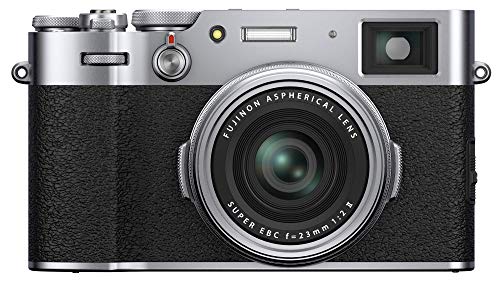 The Fuji X100V is hiding 26.1 megapixels, 4K video capturing capabilities, and a host of other features within a snazzy, compact retro design.

Image quality got a huge boost thanks to Fujifilm’s insistence on a sharper lens design. Sure, 26.1 megapixels isn’t the biggest in the business, but it outsells the Panasonic Lumix FZ80 with quick jab. You’ll notice it immediately when taking shots at close focus distance. Its X Trans color array is the same X processor found in other Fujifilm compact cameras, like the X-T3. We noticed shutter speeds made shooting in bright conditions easy.

The Fujifilm X100V also comes with film simulations that are a joy to toy with—especially with slow-motion. The Canon PowerShot ELPH 180 has 720p, which means the X100V’s 4K UHD at 30 frames per second is clearly much better. At 1080p, however, you can capture at 60fps.

We loved the retro design of the Fujifilm X100V, and it’s always a joy to see companies hide modern technology within an old shell. It’s when you turn it over that you’ll notice its modern details such as a touch screen which is also a tilting screen, an SD memory card slot, and an ISO dial. You’ll notice the optical electronic hybrid viewfinder; in some situations, the optical viewfinder is best, while other shots would call for an electronic viewfinder. There’s a dial to switch between the electronic shutter and optical.

The Fujifilm X100V Camera also has weather resistant properties, though only 98 percent of the way. It’s a first for the X100 series, but for full weather sealing, an adapter and filter need to be attached to the new lens. It’s a bummer, but you’ll probably invest in an interchangeable lens anyways considering the X100V is a fixed lens camera. Cameras like the Olympus TG-5 can be submerged in water, if that’s what you’re after.

Fujifilm cameras have always been high quality, like the X T3 and X Pro3. Perhaps a bit pricey at times, and the X100V surely falls in that camp. With the X100V Fujifilm did everything in their power to improve upon the previous X100 series camera. We believe the performance places the X100V as having excellent value—but only in the right hands. Everything the Fujifilm X100V is would be lost on a fledgling photographer.

For newcomers, consider the Panasonic Lumix FZ80. It’s inferior in just about every aspect, but it’s only a fraction of the cost and far better suited in inexperienced hands.

The Fujifilm X100V is a compact, retro-design powerhouse, fully capable of capturing sharp images. While autofocus has to be babied sometimes, it’s a small price to pay for its performance, one you’ll rarely deal with. Comparing it with its previous model, the X100V is everything Fujifilm set out to do, and more.