Traditional oven or toaster oven. It’s the inevitable debate on which to use, provided you own both. But honestly, it’s one that quickly comes moot if you’ve got a great toaster oven in your possession. And if you don’t, here’s your chance to learn why a great toaster oven can be a game changer for even the most experienced home chef. They work differently than your typical best over the range microwave.

First, some of today’s best toaster ovens heat up super quickly, unlike their traditional counterparts. Second, they versatile, allowing you to heat up food and negate the microwave – the latter should really be a stop gap measure.  Lastly, some of them use infrared technology, which cook food directly, leaving it moisture and all together better in taste. For a fancier toaster option, you should also take a look at our slide through toaster (should ensure no more burnt fingers).

So what’s a top notch toaster oven that you can by today? Look no further than Cuisinart’s TOB-206N1. It boasts an all around stainless steel finish, so it’s a fit for just about any kitchen. And unlike toaster ovens of the past there is a digital display, easy to use controls and a variety of cooking options to satisfy even the most picky of cooks.

WHY IT’S A TOP PICK: The Cuisinart TOB-260n1 toaster oven is the kitchen device everyone has been missing.

Summary: The Cuisinart TOB-260n1 toaster oven sells itself short, but only because of its name; it’s much more than a toaster oven. 15 cooking functions fast preheating, and toast that is golden brown. The only significant caveat to this oven is that there is no manual on/off switch, requiring you to set a timer of 2 hours or less. 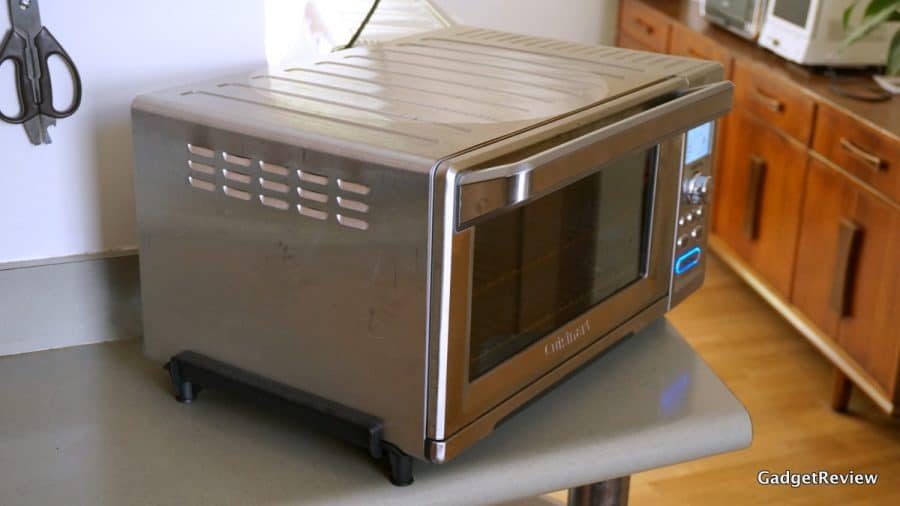 Inside you’ll find .95 cubic feet of cooking space. And while that’s largely intangible, what you should know is that you can cook up to 6 pieces of toast simultaneously, fit a 13″ pizza (stone included), or a 9″ x 13″ baking pan. The latter is actually the most impressive, though for my pan to fit I removed the racks as it slipped perfectly into the slots.

On the outside you’ll find a stainless steel finish that easily cleans and doesn’t mar (though you’ll notice that I left my pizza stone on top of the machine, and presumably from the heat it has made its metal facade brighter in finish). To that end, there is a large window and an interior light that can be activated at the touch of the button or upon opening the door. That being said, I highly recommend that you buy a toaster oven with an interior light, provided you don’t buy this one. It’s super handy and negates the need to open the door, which in turn can let out heat.

The LCD screen is easy to read and the controls are intuitive and straight forward. To activate the toaster, or wake it, just tap the control knob. From there you can select from one of 15 cooking functions (toast, broil, roast, left overs, etc), modify the time and temperature, or in the case of “toast the number of pieces and the “shade”. Which is to say, the “toast” function is preprogrammed with both temperature and time. For another appliance that offers versatility, consider the best air fryer toaster oven.

The other buttons you see allow you to add 30 seconds to the cooking time, activate the convection features, turn on the light, activate speed convection (it skips preheating), and lastly dual cook, which let’s you select two cooking modes, such as baking and keep warm, or roast then broil so you can finish your chicken off with nice brown crisp. Lastly, the crumb tray is its own slot, which is to say it can be easily removed and cleaned without having to open the oven door and perhaps risk burning yourself. Lastly, thanks to the large interior space, and removable racks, it’s easy to get inside and clean the toaster oven.

Heating Elements That Heat In Seconds

Beyond the aforementioned, you’ll find 6 quartz elements, which in short provide the infrared cooking I already mentioned. To be completely honest, I wasn’t familiar with quartz heating elements, but like me, you’ve probably been exposed to them as a result of using a space heater. Quartz has a number of advantages. For one, they heat up quick, in seconds in fact. That isn’t to say they reach their max temperature in seconds, but they do instantly, or almost instantly turn red hot. This means less preheating time is needed than traditional oven coils.

In my testing, the Cuisinart reached its max temperature in less than 13 minutes. Moreover, since quartz emits what is called short wavelength infrared, it not only heats up faster, but the objects in its way, food in this case, absorb it more effectively, and in turn don’t heat the air, which can dry out food. You might have noticed this with certain space heaters; they’re warm in toasty to stand in front of, but do a poor job in heating up the actual room. This explanation seems pretty on point with what I’ve been reading around the web.

One of the tried and tested, well, tests, is how effective a toaster oven can be at, you guessed it, toasting bread. But it’s not just a question of how it can toast bread, but how effective it can be at toasting multiple slices of bread, which in turn can denote what is commonly referred to as a heat map.

So I picked up some Sara Lee white bread – never before in the confines of my kitchen – and toasted 6 pieces, the max allowable amount to see how the heat is distributed. As you can see from the picture below, the Cuisinart is able to effectively toast all pieces, but you can see that the outside columns don’t achieve the same golden brown goodness as the center column. That being said, the Cuisinart, thanks to its different cooking functions, does a great job toasting the top and slightly the bottom, all the while maintaining a moist center. I know it sounds like marketing speak, but I can honestly back this up with my testing. To that end, the bagel function also works great, as it slightly toasts the bottom of the bagel, which in turn retains that correct amount of chewiness. Other toaster ovens often just have one toast setting, which can result in a hockey puck like texture.

As for temperature accuracy, I purchased a Taylor thermometer from Amazon. I set the Cuisinart to 450 degree F and waited. After just shy of 13 minutes the Taylor thermometer showed a temperature of about ~435 degree F. Slightly under, yes. But I’d rather that than over. Of course the location of the thermometer is a variable, and placing it center, left or right would or could impact the read out. But nevertheless, the take away here is that the Cuisinart’s temperature settings are fairly true to what is displayed. What I should note is that it reached 300 degrees in about 7 minutes, yet took another 6 minutes to increase another 150 degrees.

Beyond the dough, I also cooked the following food items and largely achieved success:

So putting aside long term testing, the Cuisinart TOB-260n1 toaster oven is one of the best I’ve ever used. Next up on my list is Panasonic’s Flash Express Toaster Oven. However, that model is largely designed for toast and offers a much smaller cooking space. Granted it’s less than half the price of this model, but with it comes far less versatility. Breville is also on my list and I believe, based on what I’ve read, that that brand’s models will pose the largest threat or the greatest level of competition.

But for now, and the foreseeable future, the Cuisinart TOB-260n1 toaster oven is my #1 pick. It offers all the cooking functions one could ever ask for, heats up faster than any traditional oven, and succeeds at living up to its designation, effectively toasting bread to a golden brown hue within the specified time, which I should note is about 6.5 minutes.  My only gripe you ask? The timer maxes out at 2 hours, which means that you’ll manually have to add time for anything that require more cooking. Put conversely, there is no pure on only option. 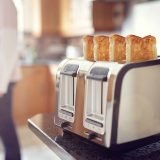 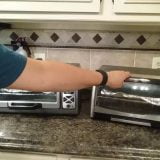 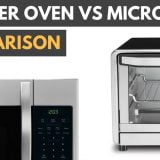 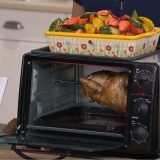 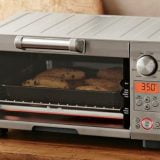