The Zink Polaroid WiFi Wireless 3×4 Portable Mobile Photo Printer (Yellow), also known as the Polaroid Pop Instant Print, is a small portable camera that doubles as a printer. It’s a product that’s very obviously being propped up on two merits: it’s got the Polaroid brand attached to it, and it has a cute, novel design that makes it appear to be a fun toy to pick up. Its middling print quality and hyper-focus on pictures prevents it from coming anywhere close to being the best portable printer, but it still makes for a novel stocking stuffer or gift, particularly for fans of older Polaroid cameras. 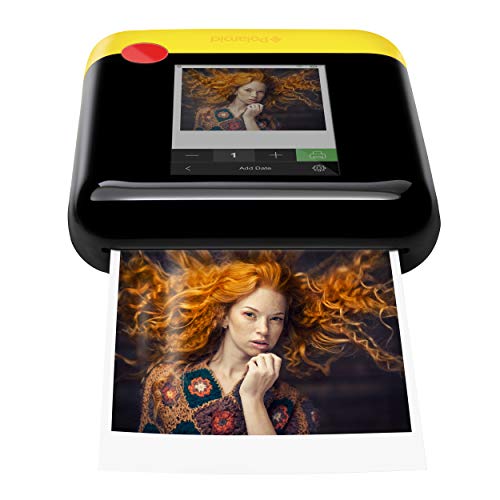 The Zink Polaroid WiFi Wireless 3×4 Portable Mobile Photo Printer (Yellow) is a cheap mobile printer that shines thanks to its novelty. It’s a portable instant camera in addition to serving as a portable printer that prints pictures from your smartphone with a cute design and enough novel value to serve as a neat but pricey stocking stuffer.

Polaroid claims the device is capable of instant printing, but Polaroid’s claims couldn’t be any further than reality. In the real world, the printer is slow; to put it into scope, printers are typically rated by pages per minute but Polaroid, ever the bold innovator, has introduced a new metric–minutes per page. Indeed, the Zink Polaroid WiFi Wireless 3×4 Portable Mobile Photo Printer (Yellow) takes over a minute to print out a single small-sized photo print; this is a marvel of engineering, truly a product of the ages. While this is admittedly not a bad figure in a vacuum–full-sized portable printers like the HP OfficeJet 200 take around 40 seconds to print an image, albeit at a larger size and with vastly superior quality–this printer can only print pictures, and small, low quality ones at that.

Speed’s a bust, so surely Polaroid went for quality over quantity here, right? If you guessed “no”, “nope”, “no-siree”, or any variation thereof, you guessed correctly. To be fair, at $99, print quality really isn’t terrible; images are blurry, sure, but it’s $99. Spending just double that (or in common cases, merely 50% more than that), however, gets you the vastly superior Canon Pixma iP110, which works as a proper printer rather than a small photo printer all while offering vastly superior print quality and superior versatility (not that that’s a high bar).

Efficiency is yet another bust for the Zink Polaroid WiFi Wireless 3×4 Portable Mobile Photo Printer. To Polaroid’s credit, they actually do something unique with it; the “Zink” in the product’s name is shorthand for “zero-ink”, which refers to a specific type of paper you put into the printer for output. It uses pressure to mix pre-applied “ink” on the paper, which then of course gives you the image; that’s pretty cool. The downside to this approach, however, is that replacement paper is very, very expensive; you’re looking at a very expensive $2 per page, a dramatic increase over the already-exorbitantly-high running costs of an inefficient printer like the Epson WorkForce WF-110. It’s fine for a few prints (which, to be fair, is likely what most users will end up doing), but if you’re printing from it regularly, it poses a very glaring question: why not just buy a better, pricier printer?

Surprisingly, Polaroid nailed the inclusion of advanced features on the Zink Polaroid WiFi Wireless 3×4 Portable Mobile Photo Printer, though they didn’t nail the execution. The device is touchscreen operated and connects to both Android and iOS smartphones, and it comes with a camera that takes pictures and shoots video. It doubles as a media playback device as well, and there’s of course WiFi support. It’s intended to be used with a phone, however, which makes its advanced inclusions questionable. Its software is sluggish and unintuitive, its touchscreen is mediocre, and its camera is terrible; it would have made more sense for it to ditch the camera and just interface with a smartphone to do mobile prints, particularly when its camera is incredibly mediocre.

Of everything Polaroid missed the mark with on this product, value is probably the largest. $99 is tantalizingly close to getting you a real, full-sized printer with vastly superior print quality and a fraction of a fraction of the running costs. If it was half the price (or, even better, a quarter of the price), it would be an easy recommendation just for the novel value alone, but at $99 it’s just too expensive to be worthwhile for most prospective buyers.

Ask yourself one question: do you intend on using this product as a serious printer at any point? If your answer to that question is “yes”, do not buy the Zink Polaroid WiFi Wireless 3×4 Portable Mobile Photo Printer. If you’re buying it as a gift, or just for the novelty, it’s not a terrible purchase; that’s clearly it’s intended purpose, and on that merit it truly does make for a fun novelty. Its zero-ink technology is a very cool idea, and the idea of a portable camera that prints portable pictures for personal pleasure is a fun one; it’s just priced a bit too high for what it is.

I'm a hobbyist writer with a strong passion for technology, focused primarily on smartphones and laptops. My main hobbies are worldbuilding, gaming (especially JRPGs), and keeping up with the latest tech.