The Zerotech Dobby Pocket Drone contains many features you would consider essential for a best foldable drone. First of all, the propellers are foldable, even if they aren’t fixed, which makes the drone even more portable. It’s quite affordable too, which is always a plus when it comes to beginner drones. 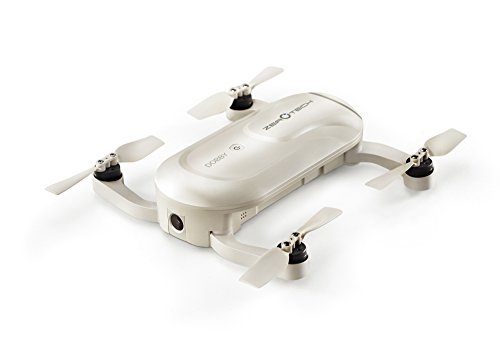 The Zerotech Dobby Drone is an excellent starter drone, plain and simple. It’s top speed is high enough that it will allow you to zip through the sky with confidence but not so fast as to make you lose that confidence if you go too fast. And considering its only seven ounces, not going too fast is a benefit instead of a detriment.

Despite its small size, the Dobby Mini is actually quite zippy in the air because it can reach a top speed of about 31 miles per hour. But if you’re confident in your piloting skills, you can try the DJI Mavic 2 Pro Drone which is about 11 miles per hour faster. The Dobby can also withstand wind speeds up to 17 miles per hour. This may not sound like much, but it’s quite impressive for such a small drone.

Flight time isn’t exactly the best on the Dobby. Rated for nine minutes of battery life, the Dobby isn’t exactly going to provide you with long-term fun. On the plus side, you can purchase spare batteries, charge them, and take them with you so you can change out the batteries when they run out. Or you can take a look at the Autel EVO Drone which is known for its stellar battery life.

The portability of the Dobby is the drone’s main selling feature. And because it’s marketed as a selfie drone it was the right idea to make it as small and light as it is. At less than half a pound (seven ounces) it can be stored in your backpack without weighing you down. The propellers can be folded in, which is nice, but aren’t fixed. They’ll still swing around if you handle the drone roughly so be careful.

The Dobby drone sports a 13 megapixel camera and 1080P video recording capabilities. Still images tend to be quite good, but video recording isn’t quite in the same league as other professional drones, such as the DJI Mavic Air Fly More Combo. But it all depends on how you use it. If you’re just looking to post cool photos and selfies to your social media account, the results are more than acceptable.

The greatest value the Dobby holds, other than its lightness, is how inexpensive it is and how easy it is to control. Veteran drone users may want something a bit more advanced, and that’s fine, but newbies should find a friend in the Dobby. Further, the 16GB of internal storage on the Dobby should be more than enough storage space for any casual or social media-oriented user.

For such a small drone, the Dobby can withstand an impressive amount of inclement weather. Not the highest we’ve seen, but still a good amount considering its size. The camera features are a hit or miss depending on what you’re using it for. We only wish the battery had a little more juice so you wouldn’t have to spend extra money on back-ups.