The XIRO Xplorer line of quadcopters have three variants, and only the XIRO Xplorer V comes with a built-in video camera. Today we are going to focus on the XIRO Xplorer G Version specifically. It’s most definitely one of the biggest contenders of the best drone for GoPro and the best follow me drone crown available at below 100 bucks. 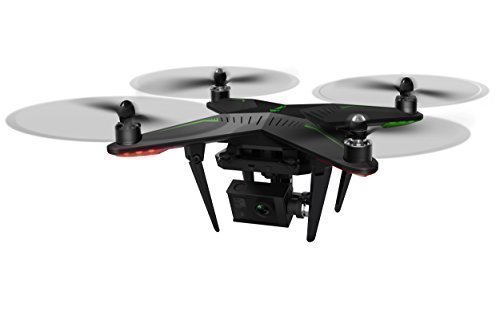 The XIRO Xplorer G Version is quite possibly some of the best bang for the buck drones with a video camera mount available on Amazon. The modular design is excellent, and the overall flight time and battery life are impressive, to say the least.

You get three speed modes with this drone. But, if you want to make use of the entirety of the 25 minutes of flight time, make sure to put it in the low-speed mode. And just like the DJI Phantom 2 Quadcopter Drone, the XIRO Xplorer is also equipped with a massive 5200 mAH battery.

You get about 500 meters of range on this drone. That number might not sound like much, but it’s excellent for a drone below $100. Obviously, to get more coverage, you have to spend much more. In that case, going for the 3DR Solo Drone would be a wise choice.

The modular design aspect of the XIRO Xplorer is fantastic because it keeps it from ever becoming obsolete or useless. The whole drone is built very durably, and there’s no build quality deficiency from the costlier XIRO Xplorer V. But even if something breaks, it’s very easy to replace the part without wasting a lot of money on another one.

As we mentioned before, unlike the XIRO Xplorer V, the G Version does not have a built-in video camera for capturing HD videos. It comes with a camera mount for both GoPro HERO 3 and 4 instead. If you really need a quadcopter that has a built-in camera, take a look at the Yuneec Q500.

At just $54, the XIRO Xplorer provides a lot of things that even the drones in the $70-$90 range don’t come with. And using something like the GoPro HERO 4, you can effortlessly shoot HD videos using this drone.

This Xplorer quadcopter is a drone that offers premium features at a very low price. If you already have a GoPro HERO 3 or 4 or planning to buy one in the future, this drone would be an excellent purchase to go with that.