Finding the best smart light bulbs can be time consuming. Most smart bulbs share the same features. But one in particular, the Wyze Bulb 4-Pack, are some of the most comprehensive LED bulbs we’ve seen. This is because these Wyze bulbs provide all the smart home features you’d expect, with the added benefit of integrating with other Wyze smart devices. 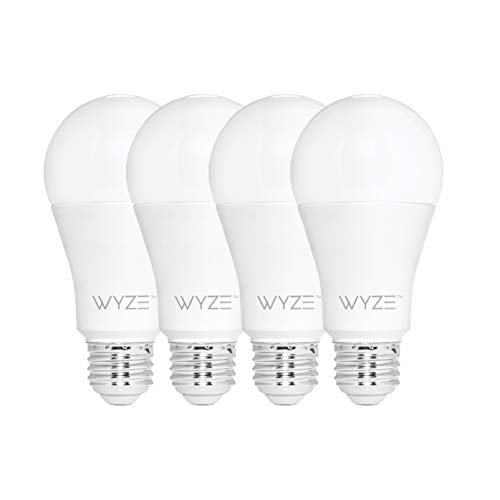 A great set of smart home light bulbs tied to an excellent application, one that becomes the central point for other Wyze products such as a security system and Wyze plugs.

With the Wyze app, you can adjust the brightness settings, which is nice when you want a dim light at night. You can even alter the color temperature, a feature the TP-Link Kasa Tunable White Light Bulbs tries to sell you on for $20 a light bulb. It does not have color options, however. For that, turn to the Peteme 4-Pack 60W.

And if you have a voice assistant, you can take advantage of voice controls. Both Amazon Alexa and Google Assistant are compatible, which includes Google Home and Echo Dot. Siri is not supported, however.

The setup process was just as easy as we expected, not being different at all from the way you’d install Philips Hue White 4-Pack. You replace your old light bulbs, and you’re good to go. Once installed, the rest of the process is done through the Wyze app, which is where you’ll connect your smart bulbs to your Wi-Fi network. It only supports 2.4GHz, however; 5GHz isn’t supported. Thankfully, most people have 2.4GHz anyways.

By themselves, the Wyze Bulb Four Pack are great, but its integration with other Wyze smart home devices is where its value truly shines. Since they’re cheap, you can invest in Wyze Sense. They’re little motion sensors to be placed on doors, automatically turning on lights when said door is opened. There’s also a Wyze security system, cameras and such that also integrate with Wyze smart bulbs seamlessly. That kind of smart home automation is invaluable, and some of the most comprehensive we’ve seen. For that, it has excellent value.

Our Wyze bulb review revealed the Wyze Bulb 4-Pack has so much more to offer than light bulbs; it’s only one piece of a much larger smart home ecosystem, one that is linked to a really intuitive and easy-to-use proprietary app. Everything can be done from the app, from light bulb settings to a Wyze security system. Its lack of color options and limitation to 2.4GHz Wi-Fi was a moot point. It more than made up for it.