Chances are, when you’re searching for the Best Grills, this includes a Weber. And if you’re serious about grilling, you’re probably looking for the Best Rotisserie Grill. The Weber Summit E-470 is definitely a grill you should consider if this is you. It has powerful burners for juicy meats and can come in natural gas or propane options! 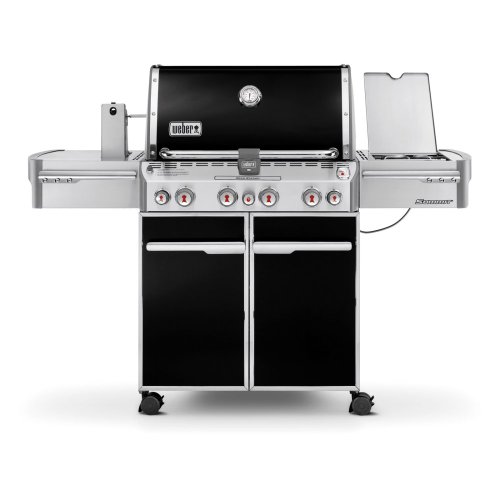 The Weber Summit 7171001 E-470 is another example in a long time of examples of why Weber is such a trusted brand. The grill is powerful enough and contains enough burners, main, side, and rotisserie, to sear any cut of meat you want to absolute perfection.

The Weber Stainless Steel Grill’s cooking area measures 468 square inches and the warming rack measures 112 square inches for a grand total of 582 square inches of cooking space. It’s large, but it’s not the biggest we’ve seen. Check out the DCS Grill if you want something larger. What Weber does have, though, is the option to choose from a natural gas grill or a liquid propane gas grill.

The Weber E-470 is constructed from stainless steel so, although it may be tough to clean the outside, you know it will be able to hold its own against the elements. At 245 pounds, it’s also a heavy barbecue, and with only two casters it’s going to be difficult to move around. Be sure you know where you want to place it and do your grilling beforehand! Or you can check out the Char Broil 463370719 for something lighter.

The Weber E-470 has a built-in rotisserie burner with a motor that drops down into the side shelf to be hidden away when not in use. The stainless steel flavorizer bars cover and protect the burners while vaporizing drips and turning them into flavor that gets back up onto the meat. The porcelain enameled cooking grates also trap heat and are very easy to clean.

The Weber Summit E-470 comes with a ten-year limited warranty which, although limited is the key phrase here, is still much longer than most other high-end grill companies offer. It comes almost fully-assembled and the work you’ll be doing is to attach four small brackets, four hex bolts, three screws, and three plastic plugs. Like I said before, it’s heavy, so you’ll probably need a friend to help lift it out of the box.

Be sure you know exactly where you’re going to put the grill when you buy it because chances are you won’t want to move it for a while. But despite that it’s hard to find anything wrong with the Summit S-670. It’s powerful, easy to clean, and easy to use. The cooking area could have been a little bigger, but it’s still big enough to feed many of your hungry friends.