If you are new to the world of digital video, you may look to compare webcams vs DSLR cameras. Many of the best webcams, after all, include support for different styles and methods of photography. So what are the major differences between these two types of cameras, and which is best for you? Keep reading to find out.

Before you learn how to choose a webcam, you need to know exactly what a DSLR camera is. It stands for digital single-lens reflex camera and this design allows users to swap out lenses, solving the problem of grainy webcam footage. DSLR cameras offer more variety than standard webcams if you are comparing wide-angle vs normal webcams.

No matter which you choose, be sure to cover the lens when the camera is not in use to dissuade hackers.

The ability to change out lenses on the fly also allows users to learn why a webcam goes out of focus, among other issues. Beyond this initial difference, there are many more comparisons to be made between the two types of cameras.

In the vast majority of instances, DSLR cameras offer improved image quality when compared to standard webcams. The ability to swap out lenses helps with this, sure, but DSLR cameras also include superior image sensors and other bells and whistles. There is a reason why DSLR cameras are the preferred choice by many professional photographers and videographers. Only the very best standard webcams compete in the same league as a competent DSLR in the realm of image quality.

Those amazing image sensors have to go somewhere, however, as DSLR cameras tend to be bulkier and heavier than traditional webcams. DSLR cameras require a dedicated carrying case and it can be frustrating to attach one to the lip of a laptop screen for live streaming. Regular webcams are often extremely small and are designed to attach to computer monitors. Most computers even come with an integrated webcam.

If you want to shoot decent video footage or conduct live streams on the cheap, go for a standard webcam. DSLR cameras are often professional-grade pieces of equipment, with price tags to match. Many standard webcams offer a budget-friendly alternative and some are even free, sort of, in that they ship with new laptops or desktop computers. Additionally, DSLR cameras allow you to swap out lenses, but these lenses also cost money.

Should you get a DSLR or a webcam for streaming?

It really depends on your personal needs. Some DSLR cameras come with dummy batteries, which are always useful, and features that make short work out of poor lighting conditions, for example.

How effective are built-in cameras?

It depends on the specs of the built-in camera. Some high-quality webcams excel with video calls and video chat, thanks to an increased video resolution and the ability to snap high-quality images.

Are there mid-level webcam options?

There are plenty of mid-level options available, such as the Canon EOS camera. These mid-grade cameras boast plenty of useful features, including a capture card, dummy batteries, an external microphone, a dedicated video mode for a video feed, and more.

STAT: Because webcams have smaller image sensors, the lighting in a photo often gets blown out while the shadows are intensified. (source) 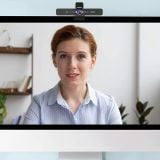 How to Narrow a Webcam View 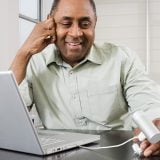 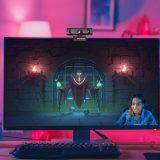 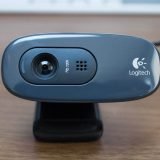 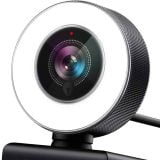