Versatility is the greatest strength the Wagner Power Steamer 915 has, a sign that you must have the best steam vacuum cleaner. With its 12 attachments and on demand power steamer controls, you could be steam cleaning floors and swapping to counters in one stroke. And the best part? No chemicals necessary! 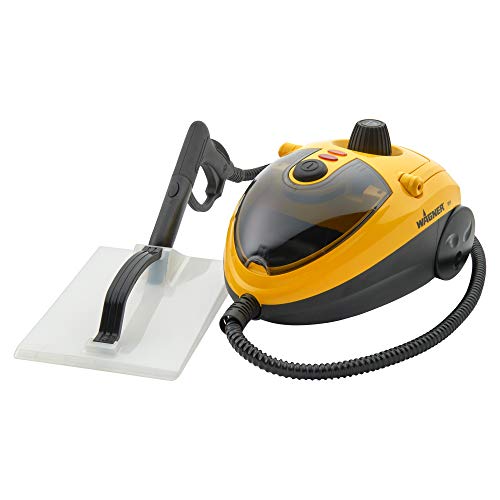 From steam cleaning floors to removing wallpaper, the Wagner Power Steamer 915 has 12 attachments to utilize, allowing for above-ground disinfecting and cleaning in addition to hard flooring.

The power of the Wagner Power Steamer 915 comes directly from its ability to heat water. While it’s a bit slow to start, once it gets going the water inside will heat to 212-degrees Fahrenheit. That kind of heat destroys 99.9% of harmful bacteria.

Both the Hoover Power Scrub Deluxe and Hoover Smartwash have a slightly larger cleaning path than Wagner 915 Steam Cleaners, but it makes up for it through versatility. Those machines are mostly limited to floors and some choice upholstery—but the Wagner Power Steamer 915 cleans floors, counters, tubs, and can double as a wallpaper removal. None of which needs chemicals, by the way.

The water tank inside the Wagner Spraytech 915 is 48 ounces. To put that in perspective, that gives you about 45 minutes of cleaning potential before refilling. And since it doesn’t collect dirt inside a tank, maintenance is at an all-time low. Rinse the water tank out and that’s it.

There’s so much to love about the Wagner Power Steamer 915. On performance alone it’s worth $115, but then Wagner threw in 11 separate attachments to sweeten the deal, like a cleaning brush, pressurized steam cleaning jet nozzle, steam hose, and included wallpaper steam plate. In other words: yes, you are getting amazing value here. It just doesn’t vacuum though, so we suggest you consider the Tineco Pure One S12 together with the Wagner.

The Wagner Power Steamer 915 is packed to the gills with value. For starters, it can steam cleaner floors as well as steam clean counters, windows, toilets, and more. Second, it doesn’t use any chemicals—just distilled water. Lastly, it comes with 11 attachments. It just doesn’t vacuum, and takes a bit to warm up. That’s still a lot of value for such a small machine.