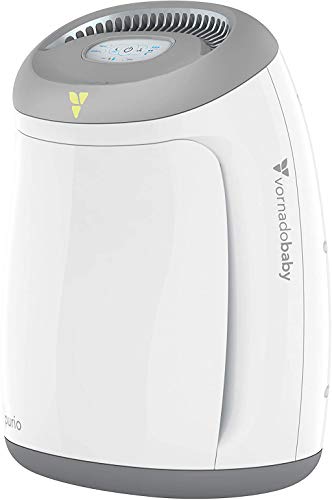 Vornadobaby Purio Air Purifiers are an effective three-stage filtration system of any baby’s room. It uses a True HEPA Filter to capture any and all contaminants, including mold, and even has filter replacement reminders so you can clear that thought from your mind and focus on the baby.

The Vornado Air Nursery Purifier employs a three-stage filtration system. This includes a pre filter which utilizes HEPA filtration to capture large particles and an activated carbon filter. The carbon filtration will keep the room smelling clean. If you want a purifier and humidifier combo to keep the room fresh and moist, try the Levoit H132.

Although Vornado doesn’t have a suggested room size for this air purifier, it should be able to maximize air quality in a room of about 125 square feet. It’s not bad for a babies purifier, but not exactly stellar for a purifier as a whole. If you do want something with an absolutely insane amount of coverage, check out the Rabbit Air Minusa2 for its over 800 square feet of coverage.

The Purio Air Purifier utilizes a True HEPA Filter that can capture 99.97% of airborne particles as small as 0.3 microns. These airborne contaminants include allergens, virus particles, pollen, mold and fungi particles for clean and healthy air for your baby. If you’re looking for something designed specifically for mold, check out the Levoit LV-PUR131S.

You probably won’t be moving the filter from the babies room after you get it in. but it’s nice to know that, at eight pounds, it’ll be easy to get it in in the first place. It’s also nice to know that it’s quiet, providing just a sweet white noise, which ensures a baby can sleep through the night while the unit is on. It also has filter reminders so you don’t have to keep checking it every single time.

Customer reviews are largely positive with a 4.5/5 star rating on Amazon. The Purio also has a night glow option which acts as a night light for the little one. Further, it has two, not just one, child safety lock to protect both the control panel and the filter. You should be aware, though, that power consumption is on the high side and will probably cost about $25 per year to run.

It’s always good when a household appliance is quiet, but it’s even more imperative when that household contains a baby. The power consumption is a little high though, which is a shame considering the smaller room coverage. Still, if you do decide on the Vornadobaby, you should be happy with the results.