The ViewSonic LS700 4K Laser Projector is, as the name suggests, a 4K laser projector aimed at the premium sector of the market. It comes with a power cable, VGA cable (for some reason–VGA tops out at 640×480, a far cry from 3840×2160), and a remote control; while it supports HDMI, ViewSonic opted out of including a cable for it despite VGA being a very dated standard. Even so, it’s one of the best long throw projectors you can get at its price point. 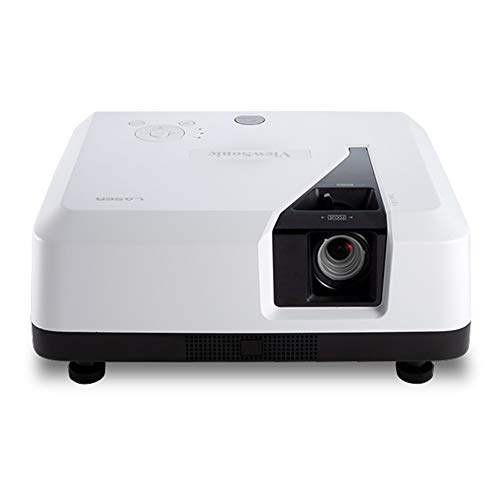 Why We Like It – ViewSonic LS700 4K Laser Projector

The ViewSonic LS700 4K Laser Projector is a high-end home theater projector that provides an excellent movie-watching experience at a premium price point. It’s better than a short-throw projector for large room setups, providing a large image size from a long distance.

Coming in at 3840×2160, the ViewSonic LS700 4K Laser Projector aims to impress. Image quality is further enhanced by HDR support, making it a great pick for watching movies and television. Input lag sits at around 16ms, making it a decent–but not phenomenal–pick for gamers. In eco mode, fan noise sits at around 36db, meaning it’s reasonably quiet; in rooms with loudspeaker setups, noise shouldn’t be an issue at all.

The ViewSonic LS700 4K Laser Projector has a max brightness of 3,300 lumens, which will produce bright images in dimly lit rooms. As with most if not all projectors, however, the picture quality will appear dim and washed out if there’s a bright light source in the room. For bright room use, it’s marginally beaten out by the ViewSonic 4K Projector, which goes up to 3,500 lumens.

Thanks to an included remote and decent, if odd, port selection, adjustability is decent on the ViewSonic LS700 4K Laser Projector. DisplayPort would have been nice to see and VGA is wasted on high-end media projectors, but optical zoom, the ability to adjust the screen size, and an included remote make it highly adjustable. It beats out the Vankyo V600, which only supports digital zoom.

Unlike DLP projectors, which have short lamp lives, the ViewSonic LS700 4K Laser Projector employs laser technology, giving it a lamp life of around 20,000 hours. This means that the watts used by this projector will be high. However, the product wearing out shouldn’t be an issue for quite a long time even for users that intend to use it liberally, and its plastic shell provides it adequate external protection. If you do not have access to a lot of power, the Asus Zenbeam E1 Projector doubles as a power bank for charging mobile devices too.

Unlike its cousin, ViewSonic LS810, the ViewSonic LS700 4K Laser Projector is a very solid high-end 4K projector. It boasts good image quality, decent brightness, and exceptional longevity thanks to its usage of laser technology, though its high price provides middling value for anyone focused on getting bang for their buck. If you’re looking for the best of the best for your home cinema setup and you don’t want a TV, this should definitely be on your list of projectors to look out for.

Bottom Line
Reader Rating4 Votes
7.2
What We Liked
What We Didn’t
9.2
Expert Rating

How to Set Up a Projector Outside

How Long Do Projector Lamps Last

Why are 4K Projectors So Expensive?