The Victorinox Wallet isn’t reaching the Halls of Best Cool Wallets anytime soon, but it does share good craftsmanship. More importantly, its slimmer profile and performance can quickly be matched with the Best Front Pocket Wallet. You get slightly more than your basic needs, like additional storage for extra cards or money. 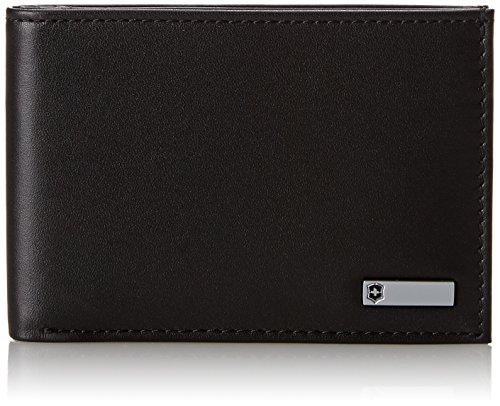 The Victorinox Wallet is a solid choice for those needing the bare minimum of card storage and additional storage for receipts and miscellaneous items. It isn’t the prettiest to look at but well-crafted.

It may not please the eyes in terms of color, but if you like to get a good look at the craftsmanship, there’s something to be said. The 100% genuine Napa leather used has been finely cut, with stitching that’s particularly good and symmetrical.

The Victorinox Wallet’s craftsmanship also speaks to its good durability. Its fine stitching will keep for several years, and the leather is rather supple. It also helps that the wallet is hand washable, which will surely keep the wallet looking its best no matter how many years you’ve had it, unlike the flimsy Crabby Wallet.

And here’s where performance is mixed. On the one hand, having 6 card slots is solid, and two more spaces than the Herschel Charlie Wallet. That’s right around what the average person might have, in addition to extra storage space if you need one or two more. However, it lacks an ID slot and no RFID protection like the Victorinox Altius Edge. If you’re a minimalist at heart, check The Radix One Slim Wallet, which can handle up to 10 cards, has a silicone band that holds onto cash, and is affordable.

The Victorinox Wallet is marketed as a “slim bifold,” but it isn’t slim enough. At first, its dimensions of 4.5″w x 3″h x 0.5″d sounds great, but once you slot in a few cards, money, and additional items, it starts to bulge. On top of that, it is a bifold, which increases its thickness when folded. It doesn’t have the versatility of the Victorinox Swiss Army Clip, but it does well enough.

Considering the Victorinox Wallet’s overall performance, design, and features, we’d say it has pretty good value. It isn’t anything fancy nor groundbreaking, but if you need a simple wallet that does a little more than cover your basic needs, it’s a fair option. If that isn’t enough, go with the Vaultskin Notting Hill Wallet.

The Victorinox Wallet doesn’t try to impress with fancy features or offer inconsistent performance. It’s simple yet effective in the way it holds 6 cards, money, and extra items in its storage pockets. There’s even good craftsmanship integrated into the leather and stitching. It just needed to be slimmer and add RFID protection.