The TicWatch E2 is the successor to the TicWatch E, and it comes packing a number of features that make it the “ultimate fitness and swim companion” as claimed by its Chinese manufacturer Mobvoi. The watch is decent to look at, comes with all the main features that you’ll need to use for your fitness, and is a lot less expensive than the Apple watch if you’d not be comfortable spending too much money. Make sure you sit through our Mobvoi TicWatch E2 review to find more about it, and see if it’s the best android smartwatch for you. 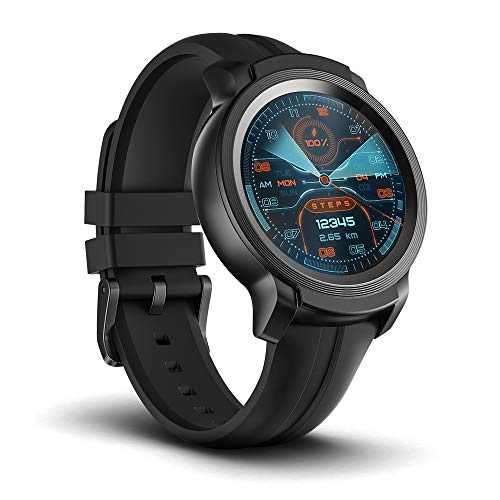 If you’ve never owned any wear OS smartwatches before, then the TicWatch E2 would be a nice, affordable one to start with. It comes with the essential heart rate monitor, runs wear OS from Google, and has a battery life that should be able to see it through one full day.

Unlike the samsung galaxy android smartwatch, the TicWatch E2 runs Google’s wear OS, which places various fitness tracking apps like Google Fit at your disposal. Thanks to its third party app support, you won’t just be limited to the apps that exist within the Google infrastructure. You’ll be able to download more apps like Messenger and Uber, and with the Qualcomm Snapdragon Wear 2100 processor, you shouldn’t expect any lag. The watch also has a decent battery life, meaning you’ll be able to get at least a day’s use on a single charge even when you’re using its heart rate monitor to measure your pulse and its GPS feature to track the distance covered when working out.

There’s really not much difference between the Mobvoi TicWatch E2, its predecessor, or even the ticwatch pro smartwatch in terms of how they look. The E2 sports a circular 1.4-inch AMOLED touchscreen screen that’s got a 404ppi pixel density, and a crown button on the side that surprisingly doesn’t come with any rotating feature. This means scrolling is going to be more of an on screen activity. The lack of an ambient light sensor means it won’t be able to adjust well under sunlight, but you can choose a watch face that is made up of dark colors to try and work around this issue.

The lack of NFC support for contactless payments on the Mobvoi TicWatch E2 is probably the one area where the smartwatch may have been unable to rise up to our expectations, but other than that, we’re pretty satisfied with what it has to offer. If this is something that you absolutely cannot do without, then consider getting the Garmin Vivoactive 3 GPS Android Smartwatch. Aside from that, the wear OS smartwatch comes with a decent amount of water resistance, which then allows it to have a swim tracking mode to track the distance covered when you’re swimming.

Like many wear OS watches, the E2 is not that difficult to use, and already comes with familiar infrastructure if you’re an Android user. The watch can also be paired with both Android and iOS devices, and comes with enough fitness features to give you reliable feedback on your workouts. If perhaps our TicWatch E2 review still doesn’t move you closer to making a decision, feel free to head on over to Amazon and see what first time users had to say about it.