The TAO 49cc is a CARB approved moped aimed at budget buyers who need a cheap, reliable commuter vehicle. It’s not the most powerful nor is it the fastest moped on the block, but it has an attractive price point and it’s a great fit for commuters in urban areas. As it’s an older model, it’s gas powered, so if you’re looking for the best electric moped, you’ll probably want to look at alternatives. 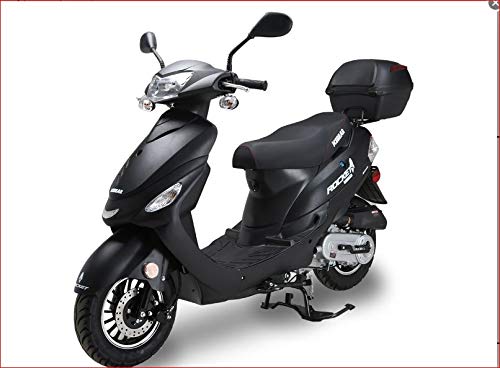 The TAO 49cc is a reasonably priced street legal moped with great range for short commutes or running errands. For its target audience, it’s a very solid buy, but its low speed means it’s inherently not for everyone. As far as gas-powered commuter scooters go, though, the TAO 49cc is a solid entry-level option.

With fuel efficiency of about 100 MPG and a 1.32 gallon tank, the TAO 49cc’s range is around 132 miles, though your mileage will vary based on speed driven. It makes for a very nice commuter vehicle or errands machine for small town or inner city use, particularly if your commute is short.

The TAO 49cc is a compact moped with a fully automatic 50cc engine. It’s dense thanks to its steel rims and air cooled internal combustion engine, but it’s still small and compact, making it ideal for drivers looking for a small, manageable vehicle. If you’re looking for a compact ride for a child, the Razor Pocket Mod Miniature Euro is a better pick, as it’s smaller and geared towards children.

Handling is decent, if unspectacular. It accelerates slowly and takes wide turns, but it’s by no means unwieldy, and its top speed is in-line with other 50cc engines. Given its speed, if you’re looking for something manageable for a child, you’re better off with something like a Razor Power Core E90 Electric Scooter, which tops out at 10 MPH and comes in a kid-friendly form factor.

Thanks to its large tires and double back shocks, the TAO 49cc provides a decently smooth ride for its small size. It’s well-suited for driving down small roads in urban centers, and it provides a usable experience on less-maintained backroads.

Because it uses a combustion engine, the TAO 49cc doesn’t feature a rechargeable battery, though it is user replaceable. You can either start it via a key using the battery’s electric start, or through kickstarting it if the battery is dead, giving it a failsafe in case the battery runs out of juice while you’re out and about.

Low pricing, decent range for its intended use, and secondary kickstarting as a failsafe all make the TAO 49cc a solid buy for the price it goes for. While $940.00 doesn’t seem that cheap, it’s significantly cheaper than a car, making it a solid buy for prospective buyers that live in city centers. It’s a very, very poor pick for anyone that lives out in the suburbs or uses either highways or the interstate regularly, but if you’re in a city center where the speed limit is low and your commute is short, it’s very close to the perfect pick.

I'm a hobbyist writer with a strong passion for technology, focused primarily on smartphones and laptops. My main hobbies are worldbuilding, gaming (especially JRPGs), and keeping up with the latest tech.