Since the first typing devices were invented in the 1700s, keyboards have been evolving. Today, the best keyboards come with a wide variety of specs, allowing users to change the switch mechanism on certain models to customize their typing experience. Below, we’ll compare tactile vs clicky switches, two of the most common mechanical keyboard switch types.

Mechanical switches are unique because it allows each key to act as a separate entity compared to most standard keyboards that connect all their keys via a single membrane. This individuated design provides users with maximum customization for key combos and hardware.

Given that the selection of many switch specs hinges on personal preference, it’s good to travel to an electronics store and test the various switch types before purchasing.

While we’re only covering tactile and clicky switches, there are three main types of mechanical switches. If you’d like to know more, read our article on linear vs tactile vs clicky switches. We also have an article explaining red vs brown switches for those who want to explore some of the specific tactile and linear switch designs.

Tactile and clicky switches share many similarities. Both switch types have what’s known as a “tactile bump” built into the mechanism. The tactile bump is a small piece that causes a slight resistance whenever the key is pressed down. This sensation is part of the switch’s tactile feedback.

Tactile switches come with options that have shorter actuation points and provide less resistance than clicky switches. These specs make typing quicker, which can be beneficial in fast-paced gaming.

Another element of a switch’s tactile feedback is the amount of noise the switch makes with each keystroke. The major difference between these two switches is that the clicky switch creates an audible sound with every stroke. The tactile switch doesn’t have the same hardware to make the loud noise but emits a softer clicking sound. Generally, tactile switches are used more for gaming than clicky switches.

Many typists swear by clicky switches. The crisp snap of a clicky switch provides a white noise that can drown out the surrounding distractions. Gamers must focus on gameplay audio, and the loud feedback from a clicky key switch can be distracting.

Clicky switches are loud and often unsuitable for those working in shared office spaces with an open floor plan; the noise can distract those around you.

Though tactile switches can be used for typing, they have a heightened sensitivity. This makes them perfect for gaming. Conversely, clicky switches tend to feature a heavier spring, which increases resistance and helps reduce the number of typos, making them better for typing.

STAT: It is projected that the revenue of manufacture of non-domestic cooling and ventilation equipment in the United Kingdom will amount to approximately 6,407.57 million U.S. Dollars by 2025. (source)

What are linear switches?

Linear switches are designed to eliminate any tactile feedback. They have a fast, smooth keystroke and don't make any clicking sound when pushed.

What do the different switch colors mean?

The variety of colors found with mechanical switches is used to denote the varying specs, such as the amount of tactile feedback.

What is the quietest keyboard switch?

Those prioritizing silence should consider linear switches. They are built to be quiet, providing very little auditory feedback. 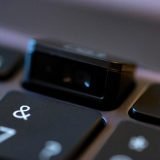 What Is a Scissor Switch Keyboard? 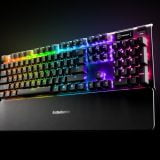 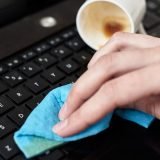 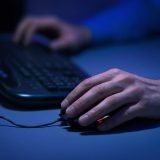 How to Connect a Keyboard and Mouse to a PS4 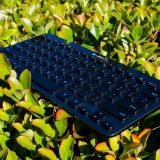