For those with an RV in their backyard and the Best Electric Bike in their garage, you’ll find the average Bike Rack for Electric Bikes tends to ignore compatibility with RVs. That’s not so with the Swagman Dispatch. It has fully embraced RVs, being specifically designed to withstand the extra strain. 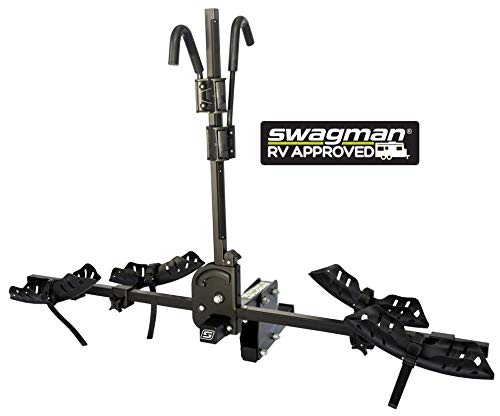 Where bike racks shy away from RVs, the Swagman Dispatch embraces it fully. It’s built to withstand the extra strain bike racks experience when installed on RVs and at an affordable price.

Being made of primarily heavy gauge steel, you’d think the Swagman Dispatch would be powerful. And, for the most part, it is. Its load capacity altogether is 90 lbs, giving you 45 lbs to allocate to each bike. But compared to the Thule T2 Pro XT, it actually has a 25% lower load capacity. However, its strength comes from handling the strain when installed in an RV. If you want to get full access to the rear storage of your vehicle, thanks to its 180-degree swing-away feature, try the RockyMounts Backstage Bike Racks.

Without the battery attached to your e-bike, the lower weight shouldn’t be a huge issue to its performance unless you’re hauling some heavy fat bikes. It’s still very accomodating to most bike frames of all shapes, sizes, and styles. It folds and swings away for easy mounting and dismounting, with a hitch mount and a 2-inch receiver.

The Swagman Bike RV Rack, unfortunately, doesn’t have any battery-related features. It’s rare for a bike rack to have charging abilities. If any exist at all, you’ll have difficulty finding one. In fact, it’s recommended you remove your e-bikes batteries before hauling.

The Bike Rack Swagman Dispatch is, on the one hand, incredibly affordable, but on the other hand, it is a touch niche. Thankfully, Swagman seems to understand this as well, considering its price is even lower than the Hollywood Sport Rider, which also handles two bikes at a time. After all, not everyone has an RV.

When you’re hauling with your car, there are a hundred and one bike racks you could pick over the Swagman Dispatch. However, chances are pretty good that most, if not all, won’t be RV compatible. Its load capacity is slightly lower than average, but 45 lbs still cover most bikes. And hey, you can haul two at a time!