Coming in with both a pair of alligator clips or a plug for your cigarette lighter. The Sunway Solar car battery charger is a straight forward and high-efficiency charger that works great for pretty much any outdoor vehicle regardless of size ranging from ATVs, snowmobiles, trailers, RVs, motorcycles, boats, cars, and plenty more. Because the Sunway Solar Battery Maintainer won’t be the best option for most people at night we recommend you check our Best Battery Chargers to find what works best for you. If you also want to upgrade your phone charger, read our post on the best portable phone chargers you can buy today! 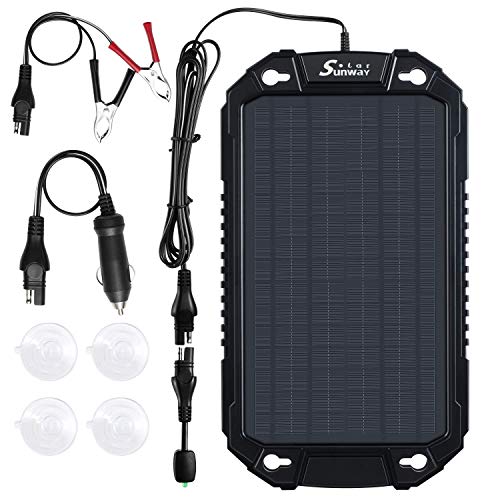 The ideal solar power battery charger and maintainer the Sunway Solar Battery Maintainer. It’s compact, portable and can be wall mounted for even greater convenience while trickle charging your batteries.

With it being water proof you don’t need to to make sure you put it away when the weather turns but as it is powered by solar energy the amount of trickle charging you get when it rains wouldn’t be all that high anyway. It is a high efficiency solar panel so is comparable with even the best battery trickle charger, the DieHard 71219 Battery Charger Maintainer as an example. It avages about 1.1 watt solar so it’s not on the same level as the best solar car battery trickle chargers, though we’d say the lower cost makes up for the shortcomings.

Like any solar car battery chargers or really any solar panels it takes rays from the sun and turns it into energy and sends it down the cord past a blocking diode, the piece there to prevent reverse from happening, and the power flows into the battery. The asterisk on that mention of the cigarette lighter plug is that some cars won’t be able to take the charge that was as when the car shuts off it basically cuts all power coming or going so if you aren’t able to get a battery charging that way try the more direct method.

Being cheaper then the Ampeak Battery Charger Maintainer Automatic the solar battery charger comes with a number of different options to connect making it one of the most different options even if you don’t account for the fact it’s both a solar maintainer and a solar charger. In our opinion we’d recommend the Sunway Solar Battery Maintainer over something like the Schumacher SC1281 Automatic Battery Charger only if you live somewhere where solar chargers will flourish with plenty of sun but you don’t have access to any built in solar battery chargers.

With a smaller solar panel then another brand such as Battery Tender you’re still getting on average similar levels of power solar, with the same actually being true for Suner Power. So while solar power isn’t quite on par with more traditional power sources it should still be a worthwhile option for anyone with a more tropical climate.