Drive-ins were all about the fun of watching anything outside — how else to explain the worst films you ever saw attracting teenagers back in the day (my day, that is). But looking for the best outdoor TVs and taking a TV into the backyard is madness — not just because of the logistics of moving it safely, but also because using it outdoors just isn’t safe on ANY level. As you will see in our best TV prices’ post, most TVs are expensive, and you wouldn’t want to lose your hard-earned investment.

But technology always has a solution — in this case it comes courtesy of SunBriteTV. As in the SunBriteTV Model 3260HD All-Weather Outdoor LCD Television — 720p of high-def resolution playing across a 32-inch display.

As should be obvious, the SunBriteTV Model 3260HD All-Weather Outdoor LCD Television is protected against the environment, but as far as you’re concerned, it’s just a high-def HDTV. Except that all HDTVs you’ve ever seen at Costco don’t have filtering material in the back and gaskets protecting access points. The SunBriteTV Model 3260HD All-Weather Outdoor LCD Television  is designed to be wall or ceiling mounted — but it comes with a set of standing legs that can quickly attached to its bottom for standing upright ( a single person can place them in position although 2 people will make the job go faster). A dust cover is also supplied to use when you’re done viewing.

The inputs are protected by a back panel to keep out dust and other detriments. Once the cable(s) are attached, the panel can be closed. What you get are as expected: HDMI, VGA, Component and a digital antenna input (this lets you control the TV signal directly, as opposed to the other inputs). Plus analog and digital audio inputs. Higher end functions, courtesy of a RS-232 input and a service port for factor use can be found there as well. To compete the availability of inputs, there’s Composite and S-Video too (should you really, really want to give your VHS player a go). The AC plug is long enough to connect to an AC outlet — if a permanent installation the outlet must be GFCI certified and be waterproofed as well. For temporary use, standard AC outlets can be used. You might be surprised, as I was, that there are controls on the side of the SunBriteTV Model 3260HD All-Weather Outdoor LCD Television. Forget about them and use the remote instead, it’s just easier. The remote is interesting because of its size and the way the surface-mounted buttons react when touched — kind of  a throwback to the “chicklets” type buttons of yesteryear. The remote is waterproof and so can handle being left outside (in most situations), and is already hip to Sony remote codes. 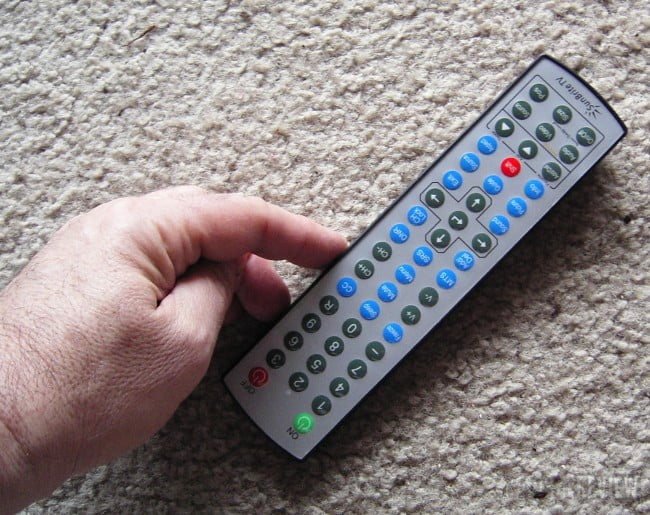 The Menu settings are straightforward and won’t throw anyone off — you’ve seen them before because they are what is needed. Because the SunBriteTV Model 3260HD All-Weather Outdoor LCD Television is used outside, you’ll pay more attention to Brightness and Contrast than you would otherwise (the SunBriteTV has a 3000:1 contrast ratio). This also includes tweaking such other settings as the picture mode (go with a personal setting here) and color temperature.. Other settings like Parental control, closed captioning and how the menu itself looks won’t prove confusing to anyone seeing them.

Now in all this one might wonder how control of the video source (TV signal or otherwise) is done — the ports on the back include an IR emitter socket. You insert the IR cable here and work it over to the IR panel receiver of the video source device (i.e., cable box). This lets you activate functions at the source so that what you want to see is displayed. To start “slow,” I placed the SunBriteTV Model 3260HD All-Weather Outdoor LCD Television on my balcony which gets indirect light most of the day – and then direct sunlight starts to hit as the sun sets. I can say the following: in indirect sunlight the 3260HD will perform perfectly, thanks to the increase in brightness and contrast that is inherently built-in in. As you reach noon and the light gets overhead, the LCD TV will start to have some issues even though it has an anti-glare coating — of course if it is mounted (as opposed to free standing), you can angle it so that the daylight is less intrusive. Once it hits dusk and then goes dark, the SunBriteTV Model 3260HD All-Weather Outdoor LCD Television starts to look abso magnificent. How much of that is due to having a big TV outside I don’t know. Or care.

I don’t find any fault with the picture — using my eyes and not some technical tools, I can see the image is even from end to end as I input a TV signal from my Dish Network satellite receiver. The angle at which the level of brightness starts to drop off is around the same as it is for most conventional HDTVs of this size — so no fault to find there either. The minimal weight of an LCD panel makes the SunBriteTV Model 3260HD All-Weather Outdoor LCD Television transportable, although two people should carry it if possible for safety. I took it to a friend‘s 4th of July party and we set it up on a table well before the people started gathering around the Bar-B-Q. Having the SunBriteTV Model 3260HD All-Weather Outdoor LCD Television there to provide sports coverage was pretty cool — we used a wireless HDMI transmitter to send the TV signal from a cable box inside. Using HDMI gave us a high-rez image and eliminated the need for audio cables.

Later we ran the Blu-ray of Independence Day and the picture looked as good as you could ask for — no motion streaking or artifact issues. A bit of tweaking of the contrast and brightness was needed, but that was to be expected. We ran sound through a pair of outdoor speakers — but we could have used the 3260HD’s built-in stereo instead as they’re more than adequate for running “above” the normal ambient sounds that you get outdoors — 20 watts of amplification taking care of that. And that’s true even when you add in the mix a bunch of folks chatting amidst grilled meat and commenting on the just-barely-enough refreshments there (i.e., beer). The 3260HD can perform a simulated surround effect, but its size makes this less than effective and reasonably speaking, it doesn’t really stand out. Those who are really into surround and are watching the SunBriteTV Model 3260HD All-Weather Outdoor LCD Television outside will probably already have a speaker system working. Here you should just adjust the bass and treble to suit the situation and keep it as “stereo” to get the best results.

Bottom line: A $1495 retail can get you a high-definition HDTV with all the bells and whistles you’d want, but leaving it outdoors — no way! The SunBriteTV Model 3260HD All-Weather Outdoor LCD Television may have a small screen size (32-inches) but what it lacks in display width, is made up in usability in the great outdoors. Say goodbye to that couch, already! How to Choose the Best LCD TV (how to)