Purchasing a kayak for the first time may be a bit daunting for anyone that doesn’t have that much fishing experience. The Sun Dolphin Excursion 10 however tries to make things a lot less stressful for such buyers by coming packed with all the features that are essential for a beginner. The Kayak comes with 3 rod holders, one swivel mount holder and two flush mounted holders at its rear. The kayak also comes with a paddle that we would argue is not of the best quality, so you’ll probably have to look for a new one if good balance and stability is what you’re after. Also for beginners, the Dyad kayak offers clear bottom viewing for two, so paddlers can take a break and watch the aquatic life progress beneath them. In this article, we will cover top reasons why we think the Excursion 10 is the best kayak for its price. 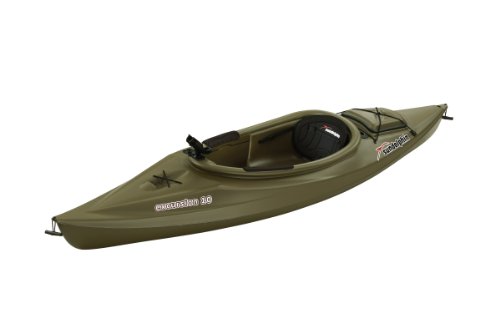 Related: Read the Sea Eagle 370 review for other great options.

The Sun Dolphin kayak is a great option to go for especially if you’re just getting started with kayaking, or you’re a hobby fisherman who wants to have a wider catch. It’s got more than enough space for your legs and has very good maneuverability.

Related: Have a look at our Pelican Maxim 100x Kayak review

Out on the water, the Excursion 10 is a marvel at keeping you nice and steady. It won’t sit up to 3 adults like the BKC TK219 Tandem Kayak since it only allows for one. You’ll want to stick to calm waters though because its Hull is not strong enough to withstand not being carried away by powerful waves. The kayak also has a couple of good options for storage space. You’ll have a bit of space under the seat, behind the seat and at the rear through a storage hatch. In case you want to set your fishing rod down, the Sun Dolphin comes with upto 3 rod holders for that, with two at the back and one at the front.

The Excursion 10 fishing kayak measures about 10 feet long and 30 inches wide, and weighs only 40 pounds making it quite easy to carry. It’s also comfortable to sit in, with adjustable foot braces to hold your feet in place. On its outside, there’s a rod holder in front of the seat and two behind, giving you three mounts to use at your discretion. You’ll also find a paddle holder on each side of the kayak, which you won’t get on the Perception Sound 9.5 kayak.

Getting ready to go out in the water will always be exciting if you have the Excursion 10 as your kayak of choice. Its 2 year warranty doesn’t match the 5 year one that you’ll get with the Lifetime Tamarack Angler 100, but handling it is a joy, and making turns is pretty basic. At less than $500, the Excursion 10 helps you find out what you like and what you don’t in a kayak, so that when you’re in the market for one again, you know exactly what to go for.

If you’re thinking of getting a kayak pretty soon, you don’t have to be specific with what type of kayak you want and what kind of features it should have if you’ve never done it before. Do yourself a favour and get the Excursion 10. It’ll help you figure out a lot of things as you go along.

What’s the Best Kayak for Kids?