A Standing Desk With a Single Motor vs a Dual Motor

If you’re considering buying a standing desk and are trying to decide between a standing desk with a single motor vs a dual motor, there are a few key differences between the two that you should be aware of. First, is the cost of a standing desk. Like some of the high-end Jarvis desks and Ikea standing desks, these can be very pricey ranging from $500 to upwards of $1,000+. The best standing desk could be either, depending on your needs.

The quality of the motor itself and its speed and strength can matter just as much as whether it’s a single or dual motor. Other factors, like weight capacity, can all impact whether a model is a good fit for you or not. This also includes whether you’re looking to trade your entire desk for a standing desk or a desk riser. Depending on your budget, you may also want to look at the benefits of a manual standing desk vs. an electric one.

Differences Between a Single Motor vs a Dual Motor Standing Desk

Electric standing desks were introduced into the market as an easily adjustable option for any office where multiple people use the same desk frequently. Generally, dual-motor desks are faster and sturdier than single-motor desks, but whether that’s true and which type is the best for you will depend on factors like height range, speed, load capacity, and cost.

Single motor standing desks can provide good stability and performance for many users and come at a lower price point.

Load capacity and speed of adjustment in electric standing desks generally depend on each other to a certain extent. Dual motor models usually have the edge here, since two motors can support more weight than one. But in a few models, the load capacity of a single motor model can be equal to or greater than the combined load capacity of two motors in another model.

The adjustment speed may not be the most important factor for some users. However, if multiple people use a desk throughout the day in multiple positions, a faster, more consistent adjustment speed will make the workday less frustrating and increase workflow. Dual motor models have a slight edge here as well, though less so than with load capacity, meaning you can find single motor models with dual motor speed without too much trouble, but at a greater cost.

It may seem somewhat obvious, but when it comes to both assembly and maintenance, the fewer parts, the better. The assembly process of an electric standing desk can be a tedious and time-consuming task, depending on the model, so a single motor model will definitely have the advantage. The same goes for maintenance; there’s less to go wrong with a single motor model, and diagnosis will be easier as well.

Electric standing desks can cost in excess of $1000 for the highest-end models, whether they’re single or dual motor. Generally speaking, however, single motor models start at a lower price point. Keep in mind that depending on other factors, a dual-motor model doesn’t necessarily equal better performance.

According to several studies, people who sit at work as opposed to standing have an increased risk of multiple major health issues and show lower productivity.

Single motor standing desks are perfectly viable and reliable for many users and are capable of high load capacities and fast adjustment speeds. While dual-motor models do tend to have higher load capacities, it’s not the case for every single model, and a single desk unit with a reasonably powerful motor may fit your needs perfectly.

Why do I even need a standing desk?

You don’t necessarily need one, of course, but there are a lot of good arguments for standing desks as opposed to sitting desks. Standing desks are far more ergonomic, significantly reducing back strain and other issues associated with sitting for long periods of time.

Which has a longer lifespan: single or dual motor standing desks?

Generally speaking, dual motor standing desks have longer lifespans than single motor models. This is largely because work is distributed between two motors instead of one, reducing the strain on both. Most dual-motor desks also come with a limited warranty period.

STAT: People who use standing desks burn 170 calories more a day on average than those sitting at work. (source) 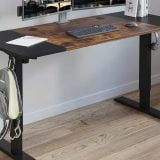 How to Exercise While Working at a Standing Desk 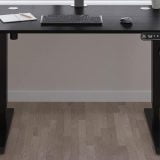 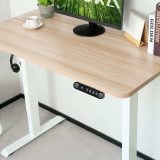 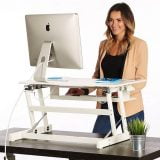 Study: Standing At Your Desk Is Good For Your Brain 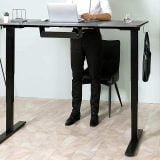 Why Do I Need a Footrest for my Standing Desk Footrail? 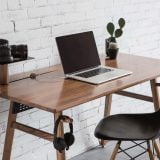