The best standing desk can help you avoid some body problems.

It seems like every time a new trend starts gathering steam in the tech community, a whole new range of small unknown startups springs out from the woodwork to fulfill the growing need. Well, we have 10 of the best standing desks for you to check out.

Our adjustable standing desk reviews have all the info you need to work while standing.

StandDesk is one of those companies, and their flagship product – the aptly-named StandDesk Pro – is yet another stand desk that puts together many of the same components we’ve come to know and need in a standing desk, all at a price that claims to be the cheapest of all the competition.

So how does the StandDesk “stand up” to our scrutiny? Read on in our StandDesk Standing Desk review to find out!

Summary: The StandDesk Pro comes in dozens of different configurations that can be tailored to almost anyone’s specific needs – but getting all those extra parts to work together comes at a cost.

Look, I’m not afraid to admit it: I’m terrible at putting furniture together. My last outing with the Jarvis Bamboo should be a pretty good indication of just how overwhelmed I can get with a simple set of instructions, which is why I was so happy to see a full-color instruction pamphlet complete with easy-to-understand drawings of everything I needed to keep an eye on.

Not only that, but StandDesk also has a whole host of setup videos on their website and YouTube channel, just in case the drawings throw you off. Even though I had all the assistance in the world though, my colossal DIY ineptitude still crept in at certain points, namely when I was trying to figure out how the crossbars lined up with the two-leg supports on either side.

Things only got more complicated when I tried to mount the handset to the underside of the desk itself. When I looked at the two screws that were included with the handset that was shipped to me (more on that in a bit), I knew that if I screwed both of them in I was going to pierce the other side of the desk.

After a call with one of the designers I was told not to worry about it, but despite that even when I did eventually try to screw them all the way in, the screws were too big for the pilot holes and wouldn’t budge another inch. This left the handset sort of awkwardly hanging off the front of the desk rather than being directly attached, which as I’ll mention later seems to be the fault more of the technical support staff than it is the designers themselves.

Because I’m always a fan of bamboo wherever I can get it, I ordered the brown bamboo version of the StandDesk desktop. On the company’s configurator, you can also choose from two other bamboo tone variants, as well as the option to go with a matte black or all-white non-bamboo finish instead.

Much as I had the same concerns when it came to reviewing different DIY home security systems, I can’t help but shake the sense that many of these startups are all buying the same equipment from the same manufacturers and then just slapping their own branding on top.

Although I’d like to spend half of this section going on about all the differences in standing desk design choices I saw between options like the Jarvis and StandDesk, there’s simply far too much that’s identical about them to go on splitting those hairs. Pretty much the only difference I could find was the wood-burned “StandDesk” logo in the right-hand corner.

That said, everything I loved about the design of the Jarvis can be reiterated here. From the smooth finish to the sturdy gray legs, our 30″ x 60″ desktop was more than large enough to handle my desktop setup (two speakers, a lamp, and a 28″ monitor”), and could still easily fit a three-monitor/two-laptop mega setup if you really wanted to squeeze it all in.

The StandDesk model I reviewed was the rectangular bamboo 30″ x 60″ non-ergo option with two non-powered wire grommets and the programmable memory controller. All told this model will set you back $825.97 out the door, almost a full $200 more than what I would expect to pay for a comparably equipped Jarvis. These standing desks are expensive, of course, but for the ergonomic well-being they provide your body, the price tag is generally worth it.

Other than the option to add a cable management tray, rolling casters, or the aforementioned crossbar though, there aren’t really a whole ton of additional features you can choose from here.

The programmable memory control panel comes with seven buttons in total: two for the up/down controls, four to handle the different presets, and one to actually set those presets depending on the current height. This option will tag an extra $49.00 onto your checkout costs, though you can also order the desk with a simple up/down switch if you’re shopping on a budget instead.

Despite any problems I may have had with the handset or the cookie-cutter design, pretty much all of those concerns washed away once I actually got down to using this thing.

Although I didn’t think it was even possible, the StandDesk somehow manages to be even more stable than the Jarvis, both at sitting and standing heights. Most days I like to run my Jarvis at max height while pressed against my wall; not necessarily because it’s that wobbly, but just because I want as much stability as I can get.

The StandDesk one-ups the gambit even further, proving to be just as steady on its own at standing height as the Jarvis is with wall support. This is all without the company’s crossbar addition, which they claim adds even more stability when purchased as a part of the package deal. When it comes to weight tolerance, the StandDesk shares yet even more stats with the Jarvis, being rated for up to 350 lbs of weight capacity. Although, that’s 60lbs more than what the Autonomous SmartDesk 2 can handle.

I’ve been using the desk for about three weeks now for daily work (and following standing desk best practices), whether it’s typing out reviews like this one from our desktop or a laptop from time to time. The desk holds up well against non-coaster drinks, and the finish on top of the desk still feels just as smooth and slick as the day I opened it despite days of sweaty wrists wresting on it and multiple wipe-downs with a rag. Though I never intentionally try to dent any desks too hard, during some lighter tests (throwing a set of keys onto it from a distance, for example), it still held up without too many visible signs of damage.

Lastly, when I measured the noise output of the desk while it rose from a sitting position to standing and back again, it was by far the quietest we’ve tested yet. I could barely get it to make more than about 9.5dB of noise, so if your biggest concern is the whirr of your motor, this is definitely the one for you.

Now, normally I don’t include much about the customer service support of any given company, only because I feel that in general if a product works the way it’s supposed to, I shouldn’t ever have a reason to call them in the first place. And while I wish I could say that was the case during my experience with StandDesk, I simply can’t finish this review without mentioning the numerous, seemingly endless problems I encountered trying to get my desk put together.

For starters, the desk I was sent didn’t have any memory handset included originally, which meant I had no way of actually controlling the up/down function on the desk itself. I contacted StandDesk about this issue, who got back to me around a day later with an apology and a promise that a new one would be shipped out shortly.

About four days later a handset arrived in the mail. The handset was initially turned on, but it wasn’t long before I noticed that none of the programmable buttons worked, nor did the down button, but for some reason, the “memory” button handled the down function just fine. I contacted the company again, and they apologized for the mixup and said they would have a new panel and control box out to me within the week.

Over two weeks later my new panel and control box arrived. Once I installed them both the desk finally began working the way it was supposed to, but not after almost a month of waiting and back and forth with a company that couldn’t remember to ship a core component of their product inside the same box from the get-go.

The StandDesk is a conflicting product. There are so many reasons to like it; whether it’s the insane stability at all heights or the overall feel and finish of the design. If everything works (and that’s a big if, as I learned), it works just the way you would expect it to at whisper-quiet operation levels, a feat that only a few select stand desks can claim for themselves (among other features to look for in a standing desk).

But for everything the StandDesk as a product does right, the company that sells it still has a while to go before it’s got all the kinks worked out. With so many problems during my review popping up (no handset, then a non-working handset that came with the wrong screws, long delivery delays between all of it), it’s obvious that the customer service and quality assurance departments might be in a little over their head. If I had to recommend the StandDesk, I’d say maybe wait another month or two before making the plunge, because as it is right now there are simply too many missed details to make the increased cost of ownership worth it. 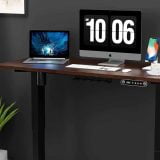 Why a Standing Desk is Bad 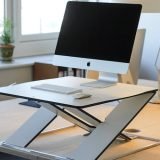 Oploft is the Nordic, Mac-Friendly Standing Desk Solution You May Be Waiting For 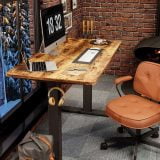 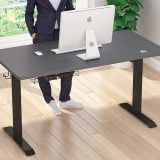 How to Set Up a Standing Desk for Ergonomics 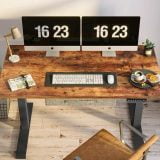 How to Adjust a Standing Desk 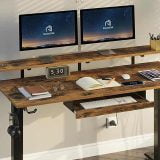