On your schedule you have dozens of cupcakes and muffins to make. And you want the designs on said delicious goods to shine, not the cup liners. The next best thing is using Standard White Cupcake Baking Liners. They may not be the best reusable baking cups, but they’ll get the job done and keep the focus on your cupcakes. 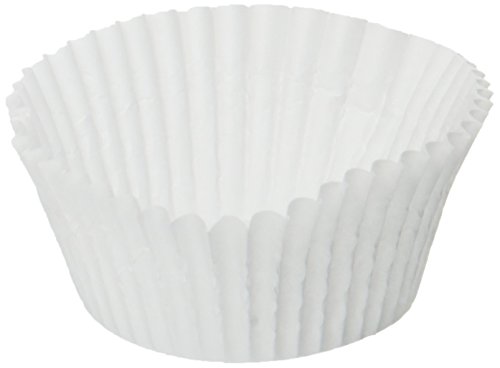 Why We Like It – Standard White Cupcake Baking Liners

A 500-piece set of non-reusable cupcake liners that are affordable and don’t get greasy along the bottom after baking delicious goods.

While these Standard White Cupcake Baking Liners are considered “standard size,” it has the same versatility standard size white cupcake liners have. You can toss in things like cupcakes, muffins, cookies, and so on. What was nice was that the bottoms of the paper baking cups didn’t get greasy after use.

With that said, these third party cupcake liners are obviously made of paper, not silicon like the AmazonBasics Reusable Silicone Baking Cups. That also means they aren’t reusable like the LetGoShop Silicone Cupcake Liners Reusable Baking Cups. People found, as did we, that they can be a bit flimsy at times.

The size of the Standard White Cupcake Baking Liners is, if you haven’t guessed, are of standard size. They will fit in a standard size cupcake pan and the like. Refrain from using these in anything bigger or else you run the risk of the paper liner spreading out. Dimensions are 1.32 x 0.1 x 1.88 inches if that helps. These only come in white, which is a bummer, but just fine if you want your cupcakes to be the centerpiece and not the cupcake design.

When considering the performance and design of the Standard White Cupcake Baking Liners, we have no problem tossing in our seal of really good value. For $7 and free shipping, you get 500 cupcake liners! We agree that’s the perfect price. But remember: these aren’t reusable. They will be tossed into the garbage. If we had to choose, we’d spend an extra $8 for the 36-pack IELEK Silicone Cupcake Liners Bundle. They’re reusable silicone and have a variety of molds.

Overall the Standard White Cupcake Baking Liners aren’t bad and serve their purpose in the right situation. They aren’t reusable and can be a bit flimsy. On the bright side, you get 500 for $7 and free shipping, nor will the liners get greasy after use. It’s a good deal in a pinch.